The Medina of Marrakech: a fascinating and typical Moroccan Old Town 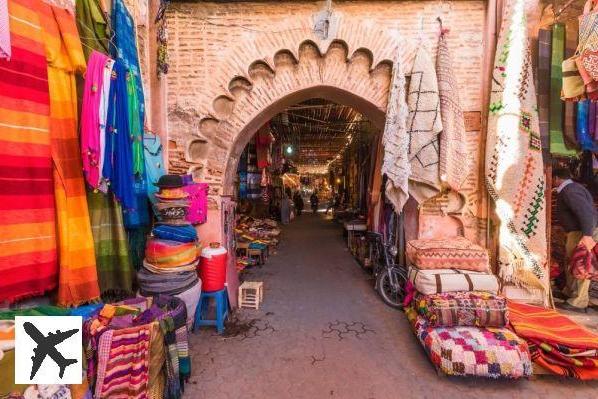 Are you planning to discover the "Red City"? To help you prepare your trip to Morocco, discover our guide to the Medina of Marrakech!

Historic heart of Marrakech, the Medina is the largest in the Maghreb! In this almost thousand-year-old old Arab city, tourists and modest Marrakechis rub shoulders. Some stroll through the winding alleys, along the orange gardens and fountains, others are busy, joining the souks of the Medina.

Listed as a UNESCO World Heritage Site, this old quarter obviously houses several magnificent monuments and vestiges such as the Koutoubia mosque, the Ben Youssef medersa or the Saadian tombs. You will also find there many museums. But above all, it is in the Medina that you will find the famous souk of Marrakech and the Jemaa el-Fna square, the populous heart and "Court of Miracles" of the city.

During your stay in Marrakech, you can't fail to discover this fantastic and typically Moroccan Old City. But what should you absolutely visit? From its monuments to practical information, its history and possible guided tours, we reveal everything you need to know to visit the Medina of Marrakech in the best conditions!

Also to be read: Visit the souks of Marrakech: a walk in the heart of the most beautiful traditional markets of the country


History of the Medina of Marrakech

Old Town and historical heart of Marrakech, the Medina was born at the same time as the city.

Founded by the Almoravids in 1070-1072, the Red City was for a long time one of the major political, cultural and economic centres of the Muslim West. The city quickly became the capital of the Almoravid emirate. This Euro-African empire extended from the banks of the Senegal River to the centre of the Iberian Peninsula, through the Atlantic coast of Morocco in the east to Algiers in the west. Under the impulse of the Almoravid rulers, mosques and palaces were built with the help of Andalusian craftsmen from Seville or Cordoba. This Andalusian influence merged with Saharan and West African stylistic elements.

This unique and original architecture can still be admired in the Medina of Marrakech. The city was also fortified by Ali Ben Youssef. The ramparts dating from 1122-1123 are still visible today!

In 1147 the Almohads took over the city. They destroyed a large part of the Almoravid monuments. The new rulers nevertheless built many palaces and religious buildings, such as the famous Koutoubia Mosque or the Kasbah. At the beginning of the 16th century, Marrakesh became the capital of the Saadian Empire and renewed with greatness. The city is embellished, ruined monuments are restored and sumptuous palaces are built. The El Badi palace dates in particular from this period. Most of the monuments of the Medina date from these different grandiose periods: the monumental gates, gardens, palaces, the Ben Youssef medersa, the Saadian tombs or the Jamaâ El Fna square.

What to see and do in the Medina of Marrakech?

The most interesting monuments as well as the majority of the museums of Marrakech are located in the Medina. You will probably spend most of your time there. The Medina is thus the most charming and touristic part of the city.

At first glance, the Medina will seem to you like an anarchic whole of a confusing disorder. After all, it is a veritable labyrinth of alleys, squares, souks and riads, in the middle of which stand palaces, mosques and Koranic schools. But it is this "bazaar" that makes the charm of the Medina. As far away as it is from Arabia or Persia, it inevitably evokes the tales of the thousand and one nights, Aladdin or Sindbad.

This large square is the heart of the Medina of Marrakech. Open and airy, this traditional, popular and lively Mecca is not to be missed! During the day, fairgrounds, street vendors and street artists provide the daily show. At night, they are relayed by the food stalls. It is the ideal starting point to visit the Medina of Marrakech and discover all its wonders.

The West: the Koutoubia Mosque

To the west of the square, you can start your visit of the Medina of Marrakech by the Koutoubia mosque. Built in the 12th century, its architecture and ascetic decoration reflect the art of the Almohads. It is famous for its minaret, 77 m high. It also houses one of the largest prayer halls in the Muslim West, which can accommodate up to twenty thousand worshippers!


The North of the Medina

To the north of the square, you can discover some of Marrakech's major monuments: the Mouassine Mosque and its museum, the House of Photography or the fantastic Secret Garden. Your visit will certainly continue with the Ben Youssef medersa, as well as magnificent riads, fountains and hammams. It is also in the north of the Medina of Marrakech that the souks district begins.

The South of the Medina

After visiting the north of the Medina, don't miss to go down opposite the Jemaa el-Fna beach in the south. You will discover the Kasbah and the Mellah, two old districts located near the Royal Palace. You can visit several must-see places, such as the magnificent Bahia Palace or the fascinating Bert Flint Museum of Crafts and Ethnology. We also recommend you to discover the ruins of El Badi Palace, which are very interesting remains. Above all, don't miss a visit to the Saadian Tombs, a hidden royal necropolis dating back to the 18th century. Richly decorated, these tombs are surrounded by lush green gardens!

In the south of the Medina, you can also visit the Mellah, Marrakech's old Jewish quarter. There you will discover the pleasant souk of the district. The atmosphere is also quieter and less touristy in the south of the Medina. Enjoy this moment of calm before returning to the meanders of the Old City. To visit the Medina of Marrakech is also to get lost in its souks and winding streets. Beware despite everything of false guides!

How to get to the Medina of Marrakech?

The Medina of Marrakech is located in the heart of the city. After your booked plane trip with Skyscanner, you will land at the city's airport. From here you can easily reach the Medina. After all, your accommodation will proba-bly be in this charming and historic district. You can take the L11, L12 and L19 bus lines from the airport to Koutoubia or Jamaa El-Fna. The large square is the perfect starting point to visit the Mé-dina of Marrakech or to reach your accommodation. For your travels in the city, you can also take the lines L2, L3, L4, L5, L6, L10, L14, L15, L16, L19, L66 at the Jamaa El-Fna stop and L11, L12 to Koutoubia.

If you plan to rent a car on your arrival in Marrakech, you should know that there are many guarded paid car parks all around the Medina. For example, you can opt for the secure car park at the Koutoubia. It is located a stone's throw from the Jemaa El-Fna square. Your hotel can also have a guarded car park. Do not hesitate to ask them before your arrival. Please note that it is best to use public transport or walking for your trips in and around the Medina of Marrakech. A vehicle can however be very useful to discover the surroundings of Marrakech and make excursions outside the city.

Guided tours of the Medina of Marrakech

To make sure you don't miss anything during your visit to the Medina of Marrakech, you can opt for a guided tour. This is the perfect activity to discover the Old City in all its details and to learn more about the history of the "Red City".

These 3 to 4 hour tours will take you through the winding streets of the Medina. Your local guide will explain everything there is to know about the palaces, gardens and monuments you will discover. There are many different types of visits. Some of them will make you discover the local souks, others will show you monuments and vestiges dating back to glorious times. In each case, you will learn more about the history of Marrakech, its sultans and inhabitants.

add a comment of The Medina of Marrakech: a fascinating and typical Moroccan Old Town