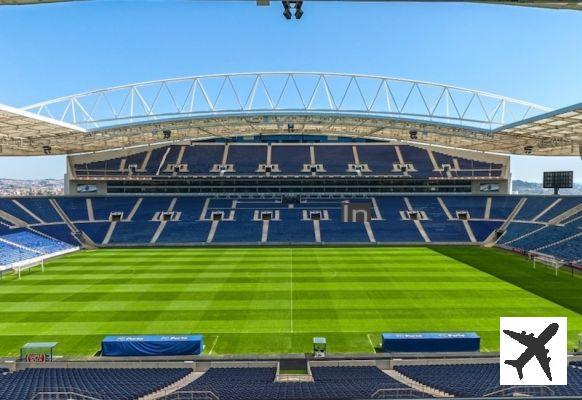 Football fans or simply curious to discover a world that is unfamiliar to you, come and visit the Dragon Stadium in Porto!

Located in Porto, Portugal's second largest city, the Dragon Stadium is the playground of FC Porto - Futebol Clube do Porto - a team that plays in the Portuguese Championship. The FCP is one of the best teams in the country. Resolutely modern, the Estadio de Dragão has a capacity of more than 50 ,000 spectators. It is the third largest stadium in Portugal, after Benfica and Sporting Lisbon.

The Dragon Stadium does not take its name from the Games of Throne series! This metaphor finds its explanation in the strength and vitality of this imaginary animal, attributes that are associated with the FCP. Indeed, since 1977, the club has always ranked among the top three in the Portuguese championship. In 2003, FCP was also the first Portuguese team to win the UEFA Cup!

History of the Dragon Stadium in Porto

The FCP was created in 1893 by António Nicolau d'Almeida. Inaugurated on November 16, 2003, the Dragon Stadium aimed to prepare the 2004 European Championship, which took place in Portugal. The construction of the Stadium has undergone many changes. Its cost is estimated at around 125 million euros.


Designed by the Portuguese architect Manuel Salgado, the Dragon Stadium is the first European stadium to have taken care to limit its energy expenditure, thanks to a rational use of energy in terms of lighting. This healthy and environmentally friendly attitude has enabled it to obtain the greenlight certificate, issued by the European Energy Agency.

Before hosting the opening match Portugal-Greece of Euro 2004, the Dragon Stadium was inaugurated in November 2003, during a friendly match between FC Porto and FC Barcelona. It should be noted that the Stadium is one of those chosen to host the UEFA Cup in 2020, on the occasion of the 60th anniversary of the competition.

Prior to 2003, the FCP trained at the Estadio das Antas, which opened in May 1952. The latter is already the third stadium invested by the Portuguese team. After the move to the Dragon Stadium, the Stadium of Antas is demolished.

What to see and do at the Dragon Stadium in Porto

Even before entering the stadium and starting to visit the Dragon Stadium, please remember to appreciate the beauty of the building from the outside. It is a first approach that is already worth the detour!

Once inside, you will be able to discover the huge stadium that has been and still is the pride of Porto. If you want to learn more about the history of the Stadium and the Club, the Stadium Museum - inaugurated in 2013 for the 120th anniversary of FC Porto - opens its doors and will add to your visit.

Guided tour of the Dragon Stadium

If you wish to visit the Dragon Stadium of Porto, you can discover the site during a guided tour. It takes about 1 hour to go around the site.

You will have access to the changing rooms, the FC Porto benches, the conference room, as well as the presidential box. However, you won't step on the legendary lawn, as access to it is forbidden. However, you will be able to get as close as possible to it.

The Dragon Stadium Museum reveals the history of FCP Porto, as well as the reciprocal influence and relationship between the city of Porto and the football club. More than 125 years are displayed before you, both visually and informatively, thanks to a surprising interactive journey!

Discover or rediscover the memorable actions, as well as the many titles won by the club. You can admire some of the most beautiful trophies, such as the UEFA Cup, or contemplate the sculpture Valquiria Dragão by artist Joana Vasconcelos. You don't need to be a football or FC Porto aficionado to enjoy your visit to the Museum.

Visit with the FC Porto App

Whether you choose to visit the Dragon Stadium or combine this discovery with that of the Stadium Museum, we recommend that you download the FC Porto App, in order to benefit from a significant amount of additional information of interest.


How do I get to the Dragon Stadium in Porto?

The Dragon Stadium is located on the Via Futebol Clube do Porto, in Porto.

Visiting the Dragon Stadium has the advantage of not involving too much travel outside the city centre of Porto. Indeed, the Stadium is located in the east of the city, about 4 kilometres from the historic centre of the Portuguese city, and about 16 kilometres from the airport. We recommend that you get there by public transport.

The Dragon Stadium can be reached by metro:

If you don't like public transport, you can come and visit the Dragon Stadium by car, which we do not recommend. In any case, avoid it less than an hour before the kick-off of a match! Outside of these critical hours, you can park in the paid car park of the Alameda Shopping centre.

Schedules and Fares of the Dragon Stadium in Oporto

Please note: it is not possible to visit the Dragon Stadium on match days and the eve of UEFA matches.

Please note: the Stadium Museum is closed on December 25th and on the mornings of January 1st, Easter Sunday and Saint John's Day.

The combined ticket allows you to visit the Stadium and the Museum.

Please note: When you arrive on site, you will exchange your confirmation voucher for an admission ticket to the Stadium and/or Museum.

Car Hire in Portugal – EVERYTHING you need to know

Top 6 things to do in Comporta

Where to stay in Porto, Portugal – Best neighborhoods and hotels

Where to eat well and cheaply in Porto, Portugal

add a comment of Visit the Dragon Stadium in Porto: tickets, prices, timetables