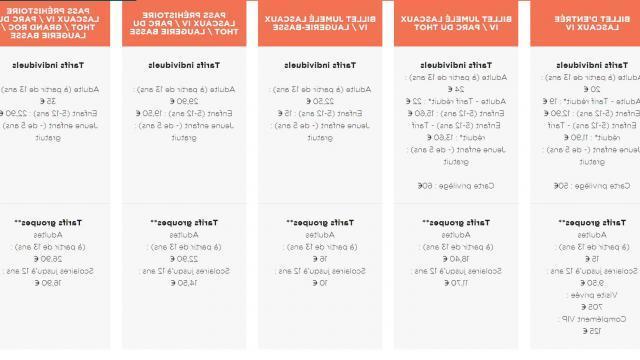 Passing through the Dordogne? Don't miss a visit to the Lascaux cave, one of the most beautiful representations of cave art known to date!

The cave paintings in the Lascaux cave are considered unique in the world. We no longer visit the original cave, but different replicas, which allow us to discover this masterpiece of prehistory. By exploring the sites of Lascaux II and Lascaux IV, you will live totally different experiences. Torchlight visits, scenographic devices and 3D projections will take you on a journey back in time to our Cro-Magnon ancestors. Discover in this article all the information you need to visit the Lascaux cave in the best conditions. History, schedules, prices, tips: here are all our tips to prepare your stay!

History of the Lascaux cave

According to legend, the young Marcel Ravidat discovered the Lascaux cave on September 12, 1940 during a walk with three comrades. His dog is chasing a rabbit that disappears into a burrow, at first sight the site of an uprooted tree. Marcel throws pebbles to try to dislodge the rabbit and realizes that the cavity seems deep. He returns a few days later with equipment to clear the entrance and explore the cavity. After some time, he warns his teacher, and specialists soon arrive on the scene. The cave of Lascaux is classified as a historical monument from the year of its discovery. The news spread and visitors soon flocked to the cave. The de La Rochefoucauld family, owners of the site, began work to open it to the public.


The number of visitors exploded and no less than a million people are estimated to have visited the cave between 1948 and 1963. However, the massive arrival of the public poses a problem. Condensation and the exhalation of carbon dioxide began to damage the walls and the paintings. In 1963, Minister André Malraux announced the closure of the cave. A replica of part of the cave, called Lascaux II, was then built 300 metres from the site. This facsimile was opened to the public in 1983. A second complete reconstruction was then built on the road to the cave and inaugurated in 2016. It is integrated into a museum, under the name of Centre International de l'Art Pariétal de Montignac Lascaux (or Lascaux IV). These are the two monuments that we explore today when we come to visit the Lascaux cave.

Our advice for a good visit to the Lascaux cave

What to do during your visit to the Lascaux cave?

The Centre International de l'Art Pariétal is divided into several areas. After accessing the belvedere for a view of the region, you enter the replica of the Lascaux cave. It consists of 7 decorated rooms. You enter the Bull Room, then you discover the Axial Diverticulum. Then come the Passage, the Nave, the Cabinet des Félins, the Apse and the Well. You will then discover 4 scenographic spaces, a theatre and a 3D cinema.


The Lascaux II facsimile reproduces only the first two rooms, where 90% of the rock paintings are concentrated. You will enter in groups of 30 people maximum, with torches. Your guide will reveal all the secrets of the paintings by torchlight, in a mystical and moving atmosphere.

How much does a ticket to the Lascaux cave cost?

There are different ticket prices for the Lascaux cave:

How to book online a ticket for the Lascaux cave?

To book your ticket online, you have two options:

Are there guided tours of the Lascaux cave?

The visit of Lascaux II is guided. It lasts about 1h15, with a departure on foot down the hill. You will pass in front of the original cave and then join the reconstruction. The visit is done in small groups by torchlight, which creates a very special atmosphere. It's a real leap 18,000 years back in time!


For the Lascaux IV site, the first part of the visit is guided. A mediator accompanies you from the site reception to the exit of the cave. You also have a "companion", a digital tablet giving you information throughout the tour. In the " free visit" area, other mediators are at your disposal to help you visit the Lascaux cave without missing anything.

Are there combined visits with other monuments?

Attention, the last admission on site is 2 hours before closing time.

How to get to the Lascaux cave?

Where to park near the Lascaux cave?

To visit the Lascaux II cave, you have a car park at your disposal at the entrance of the site. For Lascaux IV, parking P1 is located one minute's walk from the entrance to the Centre International de l'Art Pariétal. The P2 car park is located between Montignac town centre and Lascaux IV. You will have to walk 10 minutes to reach the site.

Where to stay near the Lascaux cave?

There is a wide range of accommodation available to enable you to visit the Lascaux cave in the best conditions. To be as close as possible to the site, you will put your suitcases in hotels, bed and breakfast or Airbnb for rent in the village of Montignac. But the Dordogne has a lot of charming little villages where you can take your quarters, such as Les Eyzies or Saint-Léon-sur-Vézère. There are many campsites in the area, a good option if you come to visit the cave of Lascaux in the summer.

All in all you have a lot to choose from!

Also read :
In which district to stay in Bergerac?
In which village to stay in the Périgord?

So, what are you waiting for to visit the Lascaux cave?