The Great Wall of China, one of the largest monuments in the world, was declared a World Heritage Site by UNESCO in 1987. Like a gigantic dragon, the Great Wall winds its way through deserts, meadows, mountains and plateaus, stretching 8,851.8 kilometres from east to west China. With a history of more than 2,000 years, some sections are in ruins or have disappeared. However, the Great Wall of China is still one of the most interesting attractions of our world because of its architectural and historical grandeur. Here is a list of facts and anecdotes to know before visiting the Great Wall of China.

In your opinion, can we really see the Wall from the Moon? 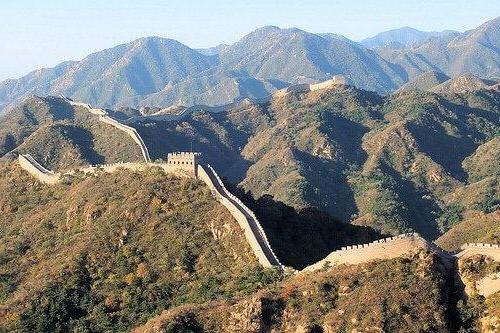 2. In 1987, UNESCO placed the Great Wall of China on the list of the world's great national and historical sites.

3. Contrary to the myth, the Great Wall is not a single continuous wall built in one go. In reality, the wall is a discontinuous network of segments built by different dynasties to protect China's northern border.

4. During its construction, the Great Wall was called "the longest cemetery on earth" because many people perished while building it. According to testimonies, more than a million people died.

5. The Great Wall of China is also known as Wanli Changcheng, literally "the long wall" of 10,000 Li (a li is a measure of distance of about 500 m). The main wall is approximately 3,460 km long with an additional 2,860 km of sections and buttresses.


6. The Great Wall of China is the longest man-made structure in the world.

7. The most visited section of the Great Wall is at Badaling, near Beijing. This section was built during the Ming Dynasty. It was the first section of the wall to be opened to tourists in 1957. This is where U.S. President Nixon visited, and it was also the site of the finish of a cycling course at the 2008 Summer Olympics.

8. As early as the 7th century B.C., a number of small walls that served as fortifications and watchtowers had been built all over the country. Initially, each state (Chu, Qi, Wei, Han, Zhao Yan, and Qin) which later united in the first Chinese empire had its own individual wall.

10. The first 'long' walls were built by Qin Shi Huang (260-210 BC) of the Qin Dynasty, who first unified China, but he is most famous for his Mausoleum of the Qin Emperor dedicated to him. It is from the Qin Dynasty (pronounced "chin") that the modern word "China" is derived. Few of these first walls still remain... 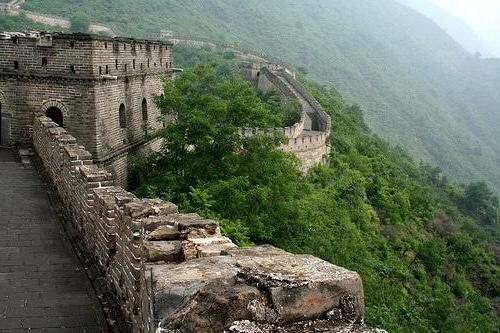 11. Because the Great Wall was discontinuous, Mongol invaders led by Genghis Khan (the "universal ruler") had no problem getting through the wall and then conquered most of northern China between 1211 and 1223. They ruled all of China until 1368 when the Ming defeated the Mongols.

14. It is common to hear that the mortar used to seal the stones was made from human bones or that men were buried inside the Great Wall to reinforce it. However, the mortar was actually made from rice flour and not from human or other bones.

15. According to the legend, a helpful dragon traced the route of the Great Wall for labour. The builders then followed the dragon's tracks.

16. A popular legend about the Great Wall is the story of Meng Jiang Nu, the wife of a farmer who was forced to work on the wall during the Qin Dynasty. When she learned of her husband's death, she cried until the wall collapsed, revealing his bones so that she could bury them.


17. At one time, family members of those who died working on the Great Wall had to carry the coffin to the top of the wall where there was a caged white rooster. The crowing of the rooster was supposed to keep the spirit of the deceased awake until they had crossed the Wall, as the family feared that the spirit would escape and wander forever along the Wall.

18. Uranus, or Tian Wang, who was the personification of Paradise, is often depicted on reliefs found at strategic places and passages on the Great Wall.

19. The historian Arthur Walden has established that the popular concept of a Great Wall, and even the name itself, did not come into Chinese consciousness directly from Chinese tradition, but rather from European sources which idealized the wall. In fact, the wall rarely appears in Chinese art before the 20th century.

20. Voltaire (1694-1778) examined the Great Wall on several occasions, but he always remained undecided on what the real subject was. He thought, for example, that the pyramids of Egypt were "childish" in comparison with the Wall, which was an "excellent work". Then at another time he called the Wall a "monument to be feared"... 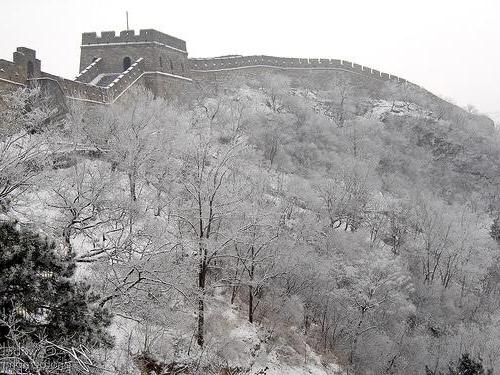 21. Franz Kafka (1883-1924) hailed the Great Wall as a great feat of human engineering. He even wrote a short article entitled "The Great Wall of China".

22. During the Chinese Cultural Revolution (1966-1978), the Great Wall was seen as a sign of despotism, and people were encouraged to take bricks from the Wall and use them for their farms or houses.

23. President Nixon's visit to China in 1972 developed tourism on the Great Wall. As tourism increased, sections of the Wall were restored, and after the death of Mao Zedong, the Chinese government recognized the Wall as a unifying symbol of the nation.

24. The Great Wall has often been compared to a dragon. In China, the dragon is a protective deity and is synonymous with spring and life energy. The Chinese believed the Earth was filled with dragons that gave shape to the mountains.

25. During the Ming Dynasty, nearly a million soldiers defended the Great Wall from "barbarians" and non-Chinese.

26. The labor to build the Great Wall came from border guards, peasants, unemployed intellectuals, disgraced nobles, and prisoners. In fact, there was a special punishment during the Qin and Han dynasties under which convicted criminals were forced to work on the Wall.

28. The Chinese invented the wheelbarrow and used it intensively in the construction of the Great Wall.

29. A section of the Great Wall in Gansu Province may disappear within the next 20 years due to erosion.

30. Watchtowers were built at regular intervals along the Great Wall and could reach heights of more than 12 metres. They were used as look-outs and fortresses or to house troops and store supplies. They also served as signal posts, where burning torches or flags were used for messages. They also represented a wide variety of architectural styles. 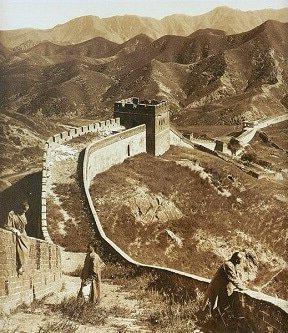 31. The western part of the Great Wall, with a long chain of watchtowers, served as a defence for those travelling on the Silk Road.

32. Parts of the Great Wall were surrounded by defensive moats, which were either filled with water or left as ditches.

33. To defend the Great Wall, the Chinese used sophisticated weapons such as axes, sledgehammers, spears, crossbows, halberds, and a local invention: gunpowder.

34. The last battle of the Great Wall took place in 1938 during the Sino-Japanese War. Traces of bullets are still visible in the Wall at Gubeikou.

35. Many temples were built along the Great Wall for the worship of the god of war, Guandi.

37. The highest point of the Great Wall is in Beijing at Heita Mountain (1,534 meters). The lowest point is at Laolongtou (sea level).

38. About 15 to 16 million people visit the Great Wall of China every year. The government has limited the number of visitors to 16 million to preserve the structure.

39. While the Great Wall is currently a symbol of national pride, China is debating how to manage and protect the Wall while controlling the development of mass tourism to it. Two organizations, the China Great Wall Society and the International Friends of the Great Wall, are dedicated to its preservation.

Have you visited the Great Wall? If you go to Beijing, will you visit it?

Audio Video 39 anecdotes about the Great Wall of China
In the footsteps of Jacques Cartier: the first voyage (1/3) ❯

What to do in Taiwan in 4 days