In the footsteps of Jacques Cartier: the first voyage (1/3) 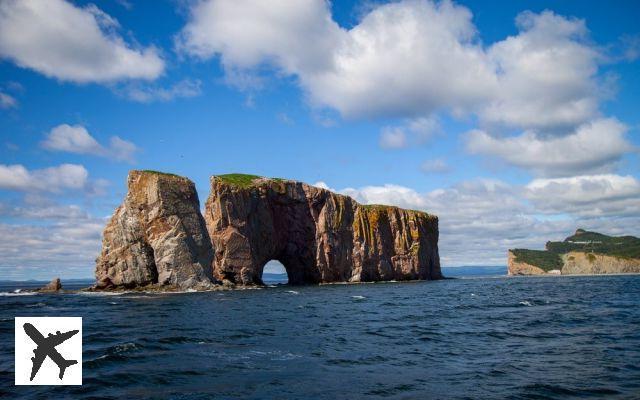 After so many trips around the world, you want to change dimension? Great expeditions are made for you! Discover a French adventure, that of Jacques Cartier on the (once) unknown lands of Canada.

It all began when a Genoese sailor, named Christopher Columbus, discovered the American continent on behalf of the Spanish crown. From then on, a real time trial towards the New World and its riches begins. If the South has returned to the Spanish and Portuguese, France follows suit, but to the North. Towards one of the most visited countries nowadays: Canada.

This adventure of the Kingdom of France began in 1534, when King François I gave the green light to a sailor from Saint-Malo, a certain Jacques Cartier. For Travel Lovers invites you to embark on the tracks of the famous Breton navigator, following the route of his very first voyage.

It was thus said that the discovery of America in 1492 made the various European kingdoms want to set out to conquer the New World. They all then sought a way to reach Asia by sea, taking the direction of the West, to get their hands on the Asian riches.

Nevertheless, the Iberian kingdoms quickly understood that Christopher Columbus did not throw the ink in the Indies, but on an unknown continent. France, the great loser of the first conquests, also wanted to take the plunge. Contrary to its neighbours to the south, the kingdom of France is heading north. But how did she know that in the North there was land waiting for her?

It turns out that a secret was kept for a long time by European fishermen. Far, far away from the coasts of the Old Continent, a land and its coastline were sighted. It is Newfoundland. There, European fishermen discovered a stunning shoal of codfish. Jacques Cartier knows this secret, since he simply sailed there when he accompanied his father. When Cartier was older, he took off and set sail again off the Atlantic Ocean, first to Brazil and then to Africa. Enough to make him a reputation in his hometown: Saint-Malo.


On the capital side, François I rebelled against the Treaty of Tordesillas. But the monarch has not finished with the challenge of the Indies, and intends to conquer new lands to make his way to Asia. In 1524, he entrusted a Florentine, Giovanni da Verrazzano, with the task of sailing to the New World. If the navigator found America, he was unable to make his way to Asia. However, Francis I did not abandon the idea of finding this famous route.

In 1534, the abbot of Mont-Saint-Michel introduced him to Jacques Cartier. After praising his merits, the navigator managed to convince Francis I, blinded by the promise to bring back gold. Thus began, on April 20, 1534, Jacques Cartier's voyage to America.

Our journey, as far as we're concerned, begins in Newfoundland. An exceptional natural landscape, where the land is scarce but the sea is omnipresent. It's as if we've just found the end of the world. A feeling contrary to that of Jacques Cartier, for whom the view of the coast is synonymous with arriving in the New World, after twenty days of sailing.

However, it is not a pure discovery, since this is the famous coastline favourable to fishing. Moreover, Cartier came across a boat from La Rochelle to fish for cod. It was the last known European contact for the sailor and his crew until their return. Following Jacques Cartier's example, let's continue on our way to the north of the island. Indeed, during his voyage, Cartier decided to sail along Newfoundland from the north. A choice which will carry his men towards a mouth, that of the St. Lawrence River. Welcome to the Strait of Belle Isle.


The landscape is magnificent, both simple and immense. This is where Jacques Cartier truly enters the unknown. He even sees new animals, such as polar bears, walruses and even great penguins (a species that is extinct today). For us, seeing this wildlife would be a real miracle.

Nevertheless, the view from the mouth remains a grandiose spectacle. It is like Canada: everything there is bigger, more impressive.

If the beginning of this adventure is already magnificent, the continuation will be even more beautiful. It's time to follow the mouth and dive into the river. From now on, the land becomes more and more present. And after passing Anticosti Island, the American continent offers itself to us, just as it offered itself to Jacques Cartier five centuries ago.

The first coast we see is that of the Magdalen Islands, which Cartier once bypassed to head towards Prince Edward Island. Facing each other, these islands look alike and are easily recognizable, thanks to their ochre-coloured sand and rock, offering an unparalleled colourful panorama. Where the blue from the Atlantic predominates. Let's take the time to admire these lands, to look at them with our eyes, without a camera.

We find ourselves in one of the most beautiful places on our planet. A place at the same time wild, electric because it is full of history, but also soothing.

This time, Jacques Cartier does not take it, and continues to sink into the Gulf of St. Lawrence. Enough to enter an indentation: the Baie des Chaleurs. Welcome to the Gaspé Peninsula. The environment can be reminiscent of Norman and British beaches, as the water cascades head-on onto enormous cliffs, giving the impression that the land has stopped dead in its tracks.


Next to such a feat, it is impossible not to feel tiny. Yet none of this is enough to scare our navigator, who is heading inland.

As soon as the French arrived on the mainland, they came face to face with the Micmacs, an Aboriginal people. The two ethnic groups did not hesitate to trade, on good terms, until Jacques Cartier placed an enormous granite cross on which was inscribed "Long live the King of France! "» .

For yes, Cartier was looking for Asia and riches, but he was planning to colonize these new lands. Later, another tribe, the Iroquois, guessed the intention of the Malouin. But a lie (that it would be a landmark) is enough to calm relations. If today the cross no longer exists, it has been reproduced identically and installed in the same place, in Gaspé.

As for the Micmacs, they still live in Gaspé. Their reserves (some of which can be visited) make it possible to feel the fascination felt by our western ancestors, in front of a completely new culture, far from European customs. However, the fascination is shared. Indeed, the Amerindians (and particularly the Iroquois chief, Donnacona) fall under the spell of the European women on board. So much so that the Micmacs and Iroquois asked the Cartier band to haggle with them...

Our navigator is also interested in the Amerindian culture and its different tribes. But his intentions are not the most peaceful... Thus, the Breton invites the natives to a great feast and takes advantage of the occasion to betray the trust established between the two peoples by kidnapping two young Iroquois!

One of them is none other than the son of Chief Donnacona. The French set sail again and returned to the Old Continent. But Jacques Cartier doesn't intend to stop there and has an idea behind his head...

To discover it, go to Episode 2, where we'll follow in the footsteps of Jacques Cartier's second voyage. See you soon!

Audio Video In the footsteps of Jacques Cartier: the first voyage (1/3)
In which neighborhood to stay in Phnom Penh? ❯

Lakes in Canada – 6 places worth visiting

Canada Visa – Spaniards can enter only with electronic authorization

Vancouver – Everything you need to know before you go

add a comment of In the footsteps of Jacques Cartier: the first voyage (1/3)