Guide to the Kreuzberg district of Berlin 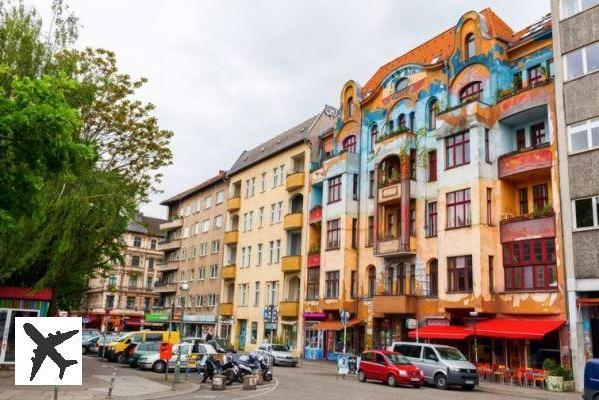 Would you like to visit the heart of the German capital? Find out everything there is to know about Berlin's fantastic Kreuzberg district!

Kreuzberg is a huge area of Berlin. It is home to students, artists and people from all over the world. Whether cosmopolitan, ecological, anarchist or bobo, Kreuzberg is an explosive mix that leaves no one indifferent. Popular before the reunification of the country, it became progressively more bourgeois but continues to charm travellers and the curious. You can take advantage of its many restaurants, do your shopping there and enjoy a relaxed creative workshop. It is also possible to relax on the lawns of Görlitz Park in the summer before having a good time at the club!

Visiting Kreuzberg in Berlin means enjoying an ethnic, cultural and social mix that is unusual in Europe. This complex social fabric is ideal for enriching your stay and immersing yourself in the Germany of the 21st century. Whether you come with family or friends, Génération Voyage wanted to present you an urban area like no other. Welcome to Kreuzberg!

The district of Kreuzberg in a few words

The district owes its name to the hill of Kreuzberg. This hill offers a splendid panorama of the entire city. Almost destroyed by Allied bombing during the Second World War, Kreuzberg was gradually rebuilt before being cut in half by the Berlin Wall. Checkpoint Charlie, the famous checkpoint, was located in the north of the district on Friedrichstrasse.

Before German reunification, Kreuzberg was a working-class suburb. Soon the area was taken over by radical left-wing movements. You could, for example, walk down the street and watch squatters, poster stickers and graffiti artists at nightfall.

In the 1970s, the Turkish community settled massively in the neighbourhood. As in France, the high concentration of the immigrant population generated tensions with the police. Today, it knows how to reinvent itself and attract more and more fascinated visitors!

What to see and what to do in Kreuzberg?

A visit to the Kreuzberg district means becoming part of an authentic cultural mosaic and discovering an exemplary social melting pot.

You would never have thought that visiting the Kreuzberg district of Berlin would be so interesting, would you?


Remains of the Berlin Wall

You can stroll along the famous Friedrichstrasse, which has now become a wide avenue. This main street, which focuses on trade and culture, was once cut in half by the Wall. The Wall, erected in just one night, divided Berlin: it materialized the Iron Curtain.

Entire sections have been preserved for historical and commemorative purposes. Keep moving: at the bottom of the street you can see the amazing Checkpoint Charlie. This border checkpoint was designed to filter trade between East and West before reunification. Today, Checkpoint Charlie has been converted into a museum: it is a must-see when visiting the Kreuzberg district. Here you will find photos, testimonials and many fascinating objects. The Berlin Wall Museum, just a short distance away, is a must: it gives an insight into the everyday life of Berliners during this dark period.

The Jewish Museum in Berlin is one of the largest cultural venues in Europe. It was designed by the American architect Daniel Libeskind and inaugurated in 2001. When visiting Berlin's Kreuzberg district, it would be a shame not to go there. The Kreuzberg district of Berlin's Kreuzberg district is the largest in the world, covering an area of almost 3,000 square meters and presenting the history of German Jewry over the centuries. Permanent and temporary exhibitions show the everyday life of these citizens in a somewhat different way. From their arrival to their massacre during the Second World War by the Nazis.

The Jewish Museum in Berlin is a very interesting and instructive museum and a major institution in the district. You can go there with your family or friends to enjoy a cultural trip! The little extra? The guided tours are always exciting and will thrill young and old alike.


Guided tours in the district of Kreuzberg

Visiting the Kreuzberg district of Berlin is not something you can just do on the spur of the moment. In fact, people who are passionate about the rich history of this unique area have understood this. Some of them have set themselves the task of offering guided tours of Kreuzberg. For us, there is no doubt: it's a great idea to do so!

Kreuzberg is an oversized district and it can be difficult to get around. Your guide will skillfully avoid the most touristic places to offer you an authentic Kreuzberg.

Guided bike tour of the district of Kreuzberg

Visiting Kreuzberg by bike... bof. Finally, the center of Kreuzberg! Black with people day and night, it's not necessarily pleasant to travel there by bike during a guided tour. But how can you visit the Kreuzberg district of Berlin while taking advantage of the little queen? Your guide has the answer: he knows the district well!

Food-tour in the district of Kreuzberg

A warm and gourmet Berlin is waiting for you in the heart of the Kreuzberg district! It all starts in Kotti (Kottbusser Tor), right in the centre of the Kreuzberg area. Your guide aims to lead you through the district by making you experience the authentic Kreuzberg. No less than five restaurants will give you the opportunity to discover. Each restaurant offers a different cuisine: modern, typically Berlin or ethnic. It's a little-known fact, but the city is doing rather well in terms of gastronomy. And what a diversity! You will enjoy delicious dishes while listening to the local anecdotes told by your guide.

This guided tour in Kreuzberg is a great idea for those who like to combine good food with a cultural excursion.

Discovery of local street art with a guide

Kreuzberg is a Mecca of European counterculture. Here, the underground is the norm and street art is brought to the pinnacle by aesthetes from all over the world. The works of art are everywhere for those who can see them in Kreuzberg, but your guide will probably be the one best able to reveal them to you.

From impressive frescoes to modest but now legendary graffiti, he-she will tell you all about the history of these timeless creations. Great names of street art such as Blu, Ash or Os Gemos will be presented to you as even less known artists. All of them know how to make the most of the urban heritage to extract its artistic potential: come and see their contribution to the city's audiovisual industry!

Guided tour with a historian

What better way to get to know everything about the city than to visit it in the company of a qualified historian? This expert will tell you all about the district of Kreuzberg!

No doubt you will be seduced by this instructive experience in the heart of Berlin.

The best hotels to stay in the Kreuzberg district

The district of Kreuzberg is very touristy, easily accessible and has many cultural points of interest. If you choose to stay in a hotel rather than renting an apartment, you can count on the presence of well-classified establishments.

Winter and summer, you're sure to find what you're looking for!

Also read :
In which district to stay in Berlin?
Airbnb Berlin: the best Airbnb apartments in Berlin
The 6 best boutique hotels in Berlin

Where to eat in Kreuzberg?

Where to eat when visiting the Kreuzberg district of Berlin? The area has many addresses, many cuisines of different origins and some dishes have even been invented here. The kebab, for example: it was a Turkish restaurant owner in the district who decided to market these delicious filled sandwiches.

You wouldn't be a little peckish there, would you?

Also read: The 12 best rooftops to drink in Berlin

How do I get to the Kreuzberg district?

It is very easy to get to the area and then visit the Kreuzberg district of Berlin. The S-Bahn, which is equivalent to the Parisian S-Bahn, serves the Anhalt Station in Kreuzberg. Take line S1, S2 or S25. Once in the district, getting around is also very easy thanks to the U-Bahn, the underground. Use the lines U1, U2, U6, U7 and U8 to get around.

You don't like underground travel and prefer the bus ? The M19S, M29, M41 or 140S lines all serve the Kreuzberg district at various locations. Perfect for a quick and easy visit!

East Side Gallery – The gallery that colors the Berlin Wall

Hotels in Berlin – The 10 most suitable for your stay

Where to sleep near Munich airport?

add a comment of Guide to the Kreuzberg district of Berlin