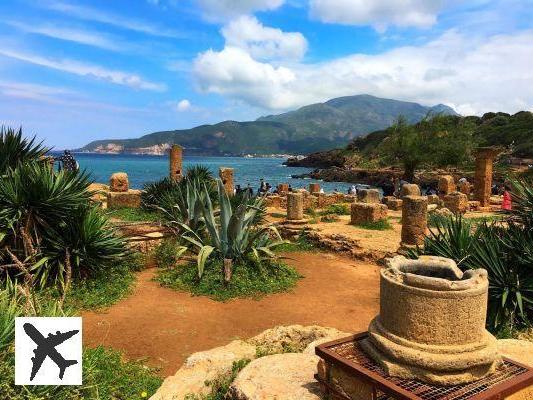 Discover the ancient hidden wonders of Algeria by visiting the Roman Ruins of Tipaza!

Look no further, if you want to discover a typically Mediterranean dream setting, you must visit the Roman Ruins of Tipaza. Once there, you will understand why this place was so cherished by the different civilizations that succeeded each other in the region! On the program: turquoise waters, ancient ruins and charming wooded hills.

Discover in this article everything you need to know so that the Roman Ruins of Tipaza no longer holds any secrets for you!

In the footsteps of the Roman Ruins of Tipaza

Around the 5th B.C., the Phoenicians founded a trading post at the edge of these calm waters. The city takes its name from this origin, which means "place of passage" or "stopover".

Although less important than the port of Caesaria (today's Cherchell), the port of Tipaza gradually became an important trade hub for the Phoenicians of Carthage, a port through which goods from Greece, Italy and Iberia transited and were sold. A Punic city, it was annexed in 146 BC by Rome at the same time as Mauritania (now Maghreb) following the siege of Carthage.

Once conquered, Tipaza developed little by little until it became a true Roman colony in the 1st century. In the 2nd century, it reached its peak with nearly 20,000 inhabitants. At that time, it spread westwards at the expense of an ancient Punic necropolis, which you can discover during your visit!


In spite of its solid and long wall of 2km, Tipaza was destroyed and plundered by the Vandals led by Genséric. Persecuted, the local Christians fled to Spain. The Byzantines, heirs of the Roman Empire, tried to bring this Roman colony back to life around the 6th century. After all, this territory was a perfect gateway to conquer Mauritania. But it was a failure.

All that remained for travellers then were the ruins and remains of a sumptuous era, green hills and the sea: a dreamlike setting that seduced the Phoenicians on their arrival 2,500 years ago!

What's behind the Roman ruins of Tipaza?

Fortunately for travellers in search of authentic adventures, Algeria is not a destination favoured by the common tourist. The Roman ruins of Tipaza are a perfect example of the hidden treasures of this beautiful North African country. But what makes this World Heritage jewel so unique and captivating is obviously its wonderful setting mixed with the calm, serenity and magnificence of this forgotten Roman colony. The weight of the ages mingles with the picturesque and authenticity of today's Algerian coastal town.

The Roman ruins of Tipaza are separated into two large ensembles. The first, outside the ancient walls, houses the Punic necropolis, an exceptional testimony to the Carthaginian period, as well as the funerary basilica of Saint Salsa. In the second, the archaeological park, most of the excavated monuments are located. Here you can visit ancient houses, ancient baths and even the colony'samphitheatre. Although modest, it was nevertheless the scene of gladiatorial confrontations and even reconstructed naval battles! In Tipaza, you can also discover tombs dating back to the time of the first Christians, the Great Basilica and the Alexander Basilica.


Also take advantage of your visit to Tipaza to admire the Royal Mausoleum of Mauritania (Kbor er Roumia) where the Berber king Juba II and his wife Cleopatra Selene II, daughter of Cleopatra and Mark Antony, are buried.

How to get there

The first step to visit the Roman Ruins of Tipaza is to go to the present city of Tipaza, 74 kilometres from Algiers.

If you have landed in Algiers and have opted to rent a car on arrival, you should know that it will take about 1h30 to get to the Roman Ruins of Tipaza. You will have to take the Tipaza bypass along the coast to get to the city.

It is possible to reach Tipaza by bus from Algiers. For this, you can go to the small bus station of Tafourah (served by the metro) which is located in the center of Algiers. On the spot, you will be able to buy in a dedicated counter your ticket to Tipaza.

There is no Internet site to reserve your ticket, it is necessary to go to the counter of the station. It takes at least 1.5 hours to reach the Roman Ruins (the duration depends on the number of stops and traffic).


You can also book a tour operator with a guide from Algiers. Before booking, make sure that the tour includes the Royal Mausoleum of Mauritania, which is located away from the town of Tipaza and not in the archaeological site.

Thanks to its Mediterranean climate, the Roman ruins of Tipaza can be visited all year round. In order to avoid the heat, it is recommended to visit them between September and May - outside the summer period. It should be noted that, with the exception of the winter months, it is possible to bathe in the crystal-clear waters bordering Tipaza.

Of course, it is advisable to plan your trip in advance in order to have a wide choice of accommodation! To help you in your search, feel free to browse this hotel comparator or visit the Airbnb website if you prefer a private individual for a more authentic experience.

If you don't wish to sleep near the Roman Ruins of Tipaza, you can also choose to stay in the nearby town of Cherchell - another tourist town in Algeria - or in the capital, Algiers. To help you, we also have an article on the best areas to stay in Algiers!

The Roman Ruins of Tipaza is located not far from the port of today's city and its city centre. It is not possible to picnic or eat in the archaeological park. However, you will find many restaurants close to the port, such as the Restaurant Romana, the Restaurant Le Dauphin or the Albert Camus. Here you can enjoy delicious seafood specialities.

To take in my backpack

On the coast of North Africa it is often very hot, so it is best to equip yourself accordingly to avoid sunburn or sunstroke.

We recommend that you bring a suitcase with you:

What I can discover in the region

Tipaza and its surroundings are full of wonders! We strongly advise you to allow time to visit the area around the Roman ruins of Tipaza. Here's what you shouldn't miss during your stay:

The destination in pictures

Where to go out in Geneva?

What went through the minds of the authors of those weird statues?

add a comment of Roman ruins of Tipaza: discovering the picturesque Algerian scenery