The 8 best amusement parks in Belgium 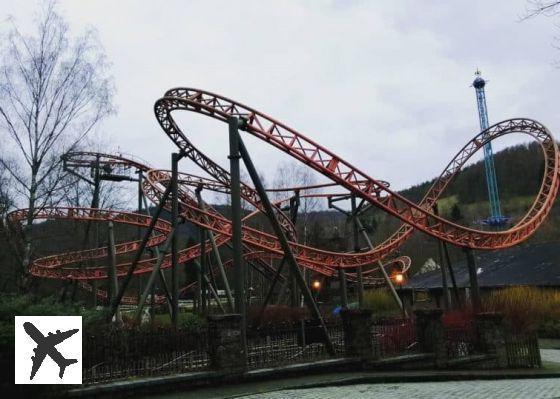 Want to have some fun? Belgium has many beautiful parks on its territory. An overview of the best amusement parks in Belgium.

With its wide open spaces and forests, Belgium is obviously seductive. After visiting Brussels, take a stroll through Bruges, Liège and Namur. Are you looking for something to have fun and spice up your stay in Belgium? Try the big Belgian amusement parks. Because of their location close to France, holidaymakers and people living in the north of the country can easily discover them. Sometimes only a few kilometres from the French-Belgian border, these Belgian amusement parks promise great days of fun.

To help you make your choice, especially between Plopsaland, Bobbejaanland or Walibi Belgium, follow the guide!

Also read :
The 14 best amusement parks to do in France
The 24 most beautiful places to visit in Portugal

Walibi Belgium is a must for amusement parks in Belgium!

With about forty attractions, Walibi Belgium remains one of the most beautiful references. Like other Walibi in Europe, it attracts a lot of people. It must be said that its attractions are as modern and innovative as ever. Sometimes stunning, the rides know how to satiate the amateurs of high acrobatics.

Opened in 1975, Walibi Belgium is constantly offering new attractions, as recently with the Pulsar. This rollercoaster circuit, launched aboard a shuttle, remains quite rightly very impressive. As for the Dalton Terror, it offers a free fall from a height of 77 metres.


Walibi Belgium is located in Wavre, 37 kilometres from Brussels. Visitors can come and enjoy themselves during the season, especially from April to November.

In the municipality of La Panne in West Flanders, Plopsaland was known before the 2000s as Meli Park. Opened in 1935, this family park actually appeals to the whole family. The SuperSplash attraction displays its vertiginous roller coaster. Unless you prefer to try the pirate zone, flying bikes or also Mega Mindy jetsky?

There are many elves in the park's alleys. The fairy-tale themed zone magically sublimates this Belgian amusement park. Indeed, to follow the desires of the visitors, the park is composed of fifteen thematic zones. Between the Anubis zone, the fair or Mayaland, you will have fun. Try out the thrill rides such as the giant Rox Flyer swings, The Big Wave and even the various roller coasters. End your day with the water attractions.

During the off-season, this Belgian amusement park is still open at weekends.

Also located in the municipality of La Panne in Belgium, this water park offers fun on the theme of Vic the Viking. This character, representing a little viking with his helmet, is a star on Flemish television. From a cartoon, the little man inspired the creation of this Belgian amusement park. A real water paradise for all ages, Plopsaqua covers an area of 4000 m².

Obviously, the structures and play of light invite you to plunge into the magical world of the little warriors of the north. Belonging to the same group as the Plopsaland amusement park, it is declined here with water games. Thanks to the originality of its décor, visitors consider Plopsaqua to be one of the most fun water parks in Belgium.


In addition to the many water slides, young and old also love the Wild River. They then test the Sky Drop, Belgium's highest water slide, with an impressive eight-metre drop! To recover from all these emotions, then head for the hot water pools or the sauna.

Plopsaqua remains open every day of the year, except in January.

Bellewaerde is located very close to the border between France and Belgium. This amusement park is also a zoo. Located in Yprès, this Belgian amusement park dates back to 1954. Familial, with its 29 attractions and 300 animals, it offers enough to spend a very nice day. Tourists can enjoy themselves in the six zones of the 54-hectare park:

The Bellewaerde amusement park has a nice slogan: 3 activities in one day. In addition to the rides and animals, this Belgian amusement park is also banking on its vast park. With its large waterfalls, this natural area offers plenty of opportunities for walking and relaxing.

This Belgian amusement park is generally open fromApril to November.

Bobbejaanland is one of Belgium's must-see amusement parks!

Situated in the beautiful village of Lichtaart in Belgium, the Bobbejaanland tourist park is home to fifty attractions. Diverse and original, these beautiful rides offer enough to spend pleasant moments. Everyone gradually opts for roller coasters, escape games or virtual reality. Bobbejaanland also stands out with its great shows and very entertaining activities. The Wicked Wheels stands out from the crowd with its impressive scenario of car and motorcycle stunts.


All Bobbejaanland attractions can be discovered from April to November.

In the Walloon region, this amusement park in Belgium is located in the province of Liège. Essentially oriented towards nature, the park has also taken care not to distort its site.

Visitors can hurtle down the slopes of the roller coaster, test the summer toboggan, the chairlift on the Amblève. They can continue on to the go-kart circuit, among other things. The highlight of the show is the water slides, to be lowered on an inflatable boat. Plopsa Coo also has an animal park with a mini farm, a game park and an island reserved for monkeys.

This Belgian amusement park is open from April to August and on weekends from September to early November.

If you are looking for a small park on a human scale, try Familiepark Harry Malter. Inaugurated in 1992 in Heusden by a family of former Circassians, it is perfect for children and nature lovers. And with good reason: the site combines a wildlife park and rides, all not far from a large lake! Familiepark Harry Malter is known as a warm and welcoming place and is appreciated for the magic it conveys.

After observing some animals, try out the ten attractions on site. You can enjoy Familiepark Harry Malter part of the year, from April to November.

Mini Europe is one of Belgium's amusement parks that you should definitely visit!

This beautiful park is a theme park of 24,000 m². You will find all the main monuments of Europe in reduced size, on a scale of 1/25, so you can travel from country to country, in the alleys of this beautiful tourist place.

From Brussels at the foot of the Atomium, travel without moving! Discover the Tower of Pisa, the Eiffel Tower, the great castles or the remarkable buildings that make up the richness of Europe. Made with casts, some buildings are made of stone or marble. Gardens display the miniature monuments.

There are also animations organized all along the route. Visitors will discover the eruption of Vesuvius, the fall of the Berlin Wall and the gondolas of Venice. Even the history of the European Union can be discovered thanks to an interactive exhibition!

You now know the best amusement parks in Belgium. The question is: which one will you choose for your next trip?

Maps and detailed plans of Brussels

add a comment of The 8 best amusement parks in Belgium