In Florence, the Calcio Storico is a spectacular and violent tradition, a mixture of rugby, football and wrestling.

Dating back to the 16th century, today's calcio storico (or Florentine calcio) is certainly the most violent form of football in the world. It is played only in Florence, Italy, where the four 27-man teams represent four historic Florentine districts (the Azzurri of Santa Croce, the Rossi of Santa Maria Novella, the Bianchi of Santo Spirito and the Verdi of San Giovanni), and compete every year in June.

Calcio storico ("historical football") has its origins in the harpastum, the game played by the legionnaires of the Roman Empire. Much appreciated by the legionnaires, they spread it to every corner of the Empire, including Florence. The official rules were written in 1580 by Giovanni de Bardi, a count of Florence. A referee (giudice arbitro) and six linesmen (segnalinee) control the game with an additional judge (giudice commissario) off the field. Finally, a referee considered to be the master of the pitch (maestro di campo) monitors the course of play and restores order in the event of a major problem or cheating.

Each team must score the most goals (caccia) to the opponent but the near absence of rules makes the game very rough. Kicks to the head are forbidden, as well as two against one. Everything else is allowed. So no matter how the ball lands in the cages: with 54 costumed men punching, kicking, head, elbowing and fighting each other on a vast and dusty field, every 50-minute match is like a clown fight.

But because of the violence they inflict and endure, and the game's status as a symbol of Florentine culture, the calcianti (players) are revered as representatives of their communities. 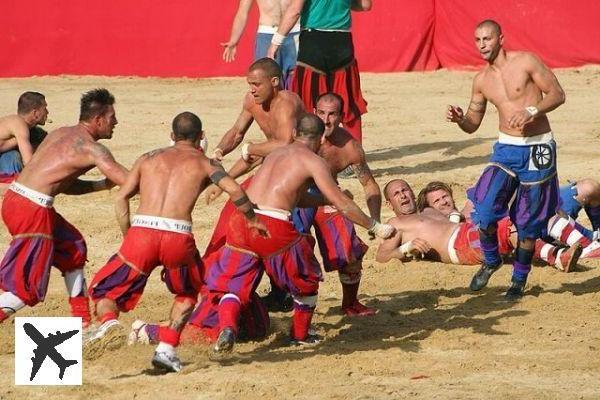 For some, this is the most eagerly awaited event of the year, more so than Christmas. It's 100% Florentine.

Traditionally, the team that emerged victorious from the tournament was given a Chianina cow, an ancient local breed. Instead today, a post-match feast is offered to the winning team.

In 2015, the Bianchi team from the Santi Spirito district won, after beating the Verdi from San Giovanni on June 24th.

Disappeared during the 18th century, it was revived in Florence in the 1930s. Nowadays, it is revived every year in a major annual tournament, the Torneo dei Quattro Quartieri (Tournament of the Four Districts), consisting of three major matches (two qualifiers and the final) that take place from 14 June, with the final being played on the day of the feast of the city's patron saint, John the Baptist.


Fifty-four players compete in medieval costume in Piazza Santa Croce, in the heart of the city, which is covered with sand for the occasion, in front of some 6,000 spectators. 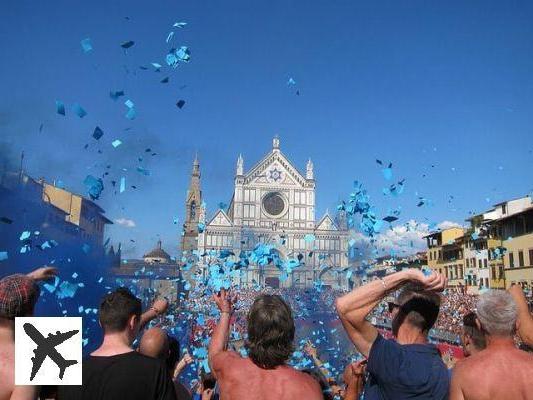 The calcio storico takes place in Piazza Santa Croce, where many spectators watch the matches from the stands or from the windows of the houses surrounding the square -

In 1575, a match was organized in Lyon by the Florentine merchants in honor of King Henry III. The latter did not appreciate the spectacle, declaring: "It is too small to be called war, too cruel to be called a game".

add a comment of Calcio Storico, the world's most brutal sport