Guide to the Centro Storico district in Rome 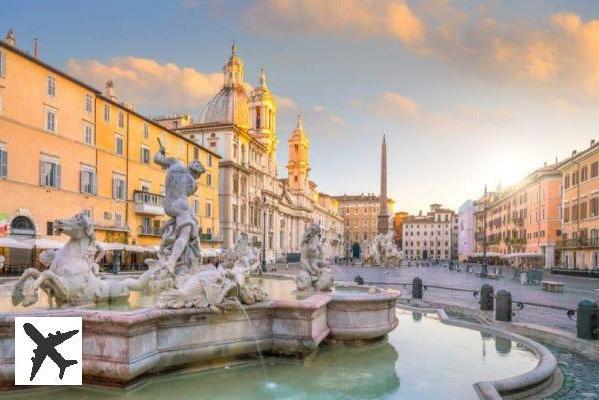 Visiting the Centro Storico in Rome is an invitation to travel... back in time! To prepare your visit, follow the guide!

The Centro Storico, or Historic Centre, area of Rome has a reputation that is well established. For centuries and centuries, it has been built around a single entity: the Roman population. It is really interesting to visit, because in a way, it is about going to meet a whole piece of History. Today, some of the buildings are still in a remarkable state, regularly maintained. On the other hand, a few others are in a rather deteriorated state due to the ravages of time. This is the risk, when one carries two millennia of history on one's shoulders...

Follow the guide to visit the Centro Storico in Rome, discovering this time frozen in the stones and on the murals. Rome is not called the "Eternal City" for nothing...


The Centro Storico district in Rome in a few words

The city of Rome is divided into several districts, just like the Parisian districts. They are all very different, just like the people who live in them. That said, not all the vestiges of past times are gathered in one and the same place. Indeed, they are present in several districts because if Rome was not made in one day, it has nevertheless spread. This is how you can find the Capitol and the Colosseum in the Ancient Quarter, the Piazza Navona and the Pantheon in the Old Rome .

What to see and what to do at the Centro Storico in Rome?

Plan to spend at least two full days in the historic centre of Rome. This is the minimum to hope to visit the essentials. Most of Rome's sights are historical sites, but they are still a must in the city. They are not all in one place. On the contrary, they are scattered all over the city, on the right and left banks of the river crossing Rome, the Tribe.

Among the many buildings that are absolutely worth a visit, here is a selection of the must-sees for a good visit to the Centro Storico in Rome. It's a question of setting out to meet a whole civilisation. The Roman Empire was powerful and perennial, and this can still be seen today, either by the still intact buildings or the ruins. These ruins will appeal to your adventurous spirit: it is impossible not to try to reconstruct the life of the time...

Admire the Colosseum, this huge amphitheatre that has seen bloody episodes of Roman life, as well as the nearby Roman Forum, a very old public square where trade was conducted. Discover also the Pantheon, where the men who played an important role in Rome are buried. Take time to stop at the Vatican to visit St. Peter's Basilica or the Sistine Chapel. The city-state is not inaccessible, but book your tickets in advance - you won't be the only one who wants to get in.

To the south-east of the city is the Trastevere district, the ideal place to stroll around and soak up the romantic atmosphere of Rome. The small streets and colourful buildings of the district will give you a glimpse of the daily life of the inhabitants, for a complete change of scenery. Find a troquet, have a cappuccino and taste the Dolce Vità.

Many other historic monuments and squares await you: such as the Trevi Fountain, Piazza Navona or the Caracalla Spa. All of them have a story to tell you.

The Roman Catacombs: the Capuchin Crypt

Visiting the Capuchin Crypt is a rather marginal way to discover the Centro Storico in Rome. In fact, it may not be the first thing that comes to mind when you think of the Eternal City. However, it is a visit that is well worth the detour, except for children, as it can sometimes be frightening. Notice to amateurs, therefore.

You will discover the monastic church whose occupants were the Capuchin monks. Then, the crypt itself, its past, its history and of course, its bones...


Guided tours to do at the Centro Storico

Combine several monuments in one visit

Many providers offer guided tours of several monuments at once. Often these tickets have a queue cutter, which will save you precious minutes or even hours. These are combined tours that allow you to discover the entire historic centre of Rome, saving you from having to think about a perfect itinerary. In fact, it already is and it is designed for you! There are guided tours of the Colosseum, Forum and Mount Palatine, among others. Alternatively, you can target the Vatican City, opting for a guided tour of the Sistine Chapel, St. Peter's Basilica and the city itself.

Alternatively, you can opt for the RomaPass which, in addition to giving you access to the city's transport system, allows free access to a number of key monuments such as the Colosseum or the Baths of Caracalla with a ticket. Valid for 48 or 72 hours, the RomaPass is a good alternative for visiting the Centro Storico.

The Eternal City is very pedestrian, and many things can be done on foot. But there is another way to discover its streets and monuments: cycling. Guided bike tours are organized everywhere to discover, from the outside in most cases, but with clear explanations, all the monuments of the city. This allows us to cover a wide selection of the must-see things to see in Rome.

As you know, Italian gastronomy alone is worth the detour. Therefore, combine your stay in Rome with a guided tour of the monuments with a culinary tour of the best that Rome has to offer. Savour these moments, and taste the Italian and Roman delicacies throughout a tour designed for the most gourmet. Street food, authentic trattoria cuisine, authentic drinks: there is something for everyone. Some providers even allow the guided tour in the evening, to enjoy Rome by night at the same time.

Visit the Centro Storico in Rome by bus

There is also the option of a guided tour by bus, often double-decker. The numerous stops made by the bus allow you to take the time to discover each building. Moreover, you will benefit from the explanations of the guide on board with you.

The small advantage: you can get on and off whenever you want! Tickets for this kind of guided tour last, for the most part, from 2 to 72 hours. This allows you to manage according to your schedule and, above all, your wishes!

Discover the oldest collection of museums in the world, the Capitoline Museums. On their own, they house all the History of Ancient Rome: bronze or marble statues, paintings on canvas or murals, lift the veil of mystery of this famous era. Guided tours are organized to allow you to learn as much about the works as about the magnificent sites.

They take place in two palaces in Piazza del Campidoglio, Palazzo Nuovo and Palazzo dei Conservatori, but also at the Montemartini power station.

The other museums of Rome

The city of Rome abounds in museums retracing the history of its civilization, its Empire and its culture. In addition to the Capitoline Museums, you can visit the other museums that are also worth a visit: the Museum of Rome, the Barracco Museum and the Bonaparte Museum.

Visit the Villa Giulia, a museum dedicated to Etruscan art. It is the most important collection of Etruscan art in the world, whose origins date back to the 9th to 1st centuries BC.

The best way to visit and enjoy the Centro Storico in Rome is to stay here. The advantage of choosing accommodation in the heart of the city is that you will find it easier to get around on foot. We recommend Locanda Del Sol, a hotel located in the Campo Marzio area, not far from the Tiber and Palazzo Montecitorio. Depending on the time of booking, you can expect to pay between €90 and €145 per night.

For those on a slightly smaller budget but who still want to be in the centre, we recommend the Domus Ester. Ideally located for a pedestrian discovery of the city. The minimum charge is 50 € per night, but it is an excellent value for money.

Also read :
In which district to stay in Rome?
Airbnb Rome: the best Airbnb apartments in Rome

Where to eat at the Centro Storico in Rome?

The reputation of Italian gastronomy is well established. To taste it, we recommend Emma Pizzeria, a trattoria located in Via del Monte della Farina (literally "Mount of Flour"). This typical restaurant offers many Italian dishes, not only pizzas, with vegetarian and vegan proposals.

Finally, you can't visit the Centro Storico in Rome without gelato! Indeed, ice cream, which you can get in gelateria, is an institution in Italy. Whether you prefer it in a cone like 72% of the Italian population, or in a small jar, you will be able to get it both in winter and summer. We recommend the gelateria Otaleg, run by Marco Radicioni. He offers original tastes, even salty, and of course the great traditional ones: chocolate, strawberry, vanilla... Bonus: you can mix the tasting with the visual experience. Indeed, the workshop is visible from the outside!

Also read: The 15 best rooftops to drink in Rome

How to get to the Centro Storico district in Rome?

The city of Rome is very well served by the various means of transport.

Now you know everything you need to know to visit the Centro Storico in Rome! And you, what are your key addresses?

Audio Video Guide to the Centro Storico district in Rome
How can I attend an AS Roma or Lazio match at the Stadio Olimpico in Rome? ❯