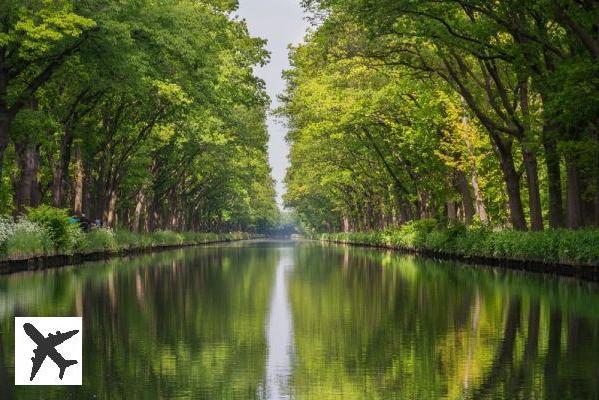 Passing through the South? Then go and visit the Canal du Midi, one of the most famous natural attractions in the South of France!

Also read :
The Canal du Midi by motorhome: advice, areas, itineraries
The 21 must-do things to do in Occitania

The Canal du Midi In a few words

The Canal du Midi is the largest French work of the 17th century. The idea of such a canal dates back to the time of Charlemagne. However, it was in the 1660s that Pierre-Paul Riquet took over the project. He solved the problem of feeding the canal by suggesting the creation of canal bridges, locks and aqueducts. It is thus confident that he defends his project in front of Louis XIV's finance minister, Colbert. In 1866, this crazy project finally begins. Nevertheless, the project is long and the king ends up no longer supporting the work. To save the project with his life, Riquet took over financially. Moreover, the latter will not see the inauguration of the Canal du Midi, completed one year after his death (1681).


The Canal du Midi has several different sections, between Toulouse and Marseillan. Between the two extremities, there are 63 locks, 130 bridges, 55 aqueducts, 6 dams and finally 7 canal bridges. At the end of the 240 kilometres, it is connected to the Canal latéral à la Garonne. This connection allows a crazy idea: to link the Atlantic to the Mediterranean.

What to do and what to see on or near the Canal du Midi?

Here is one end of the Canal du Midi. This is where the Canal du Midi ends, crossing with the Canal latéral à la Garonne and the Canal de Brienne. Thanks to this mouth, it is finally possible to connect the Mediterranean and the Atlantic. Previously, boats had to pass through the Strait of Gibraltar (!) and thus make a detour of 5000 km.

The arrival in the port is marked by the passage under the Twin Bridges.

As mentioned above, navigation on the canal and its supply was made possible thanks to the locks. But what is it? It is a structure with two gates and a basin (egg-shaped in our case). Thanks to the locks, it is therefore possible to control the water level and its flow. But it also allows boats to navigate and pass through the different levels. Without these locks, the Canal du Midi would not have come into being.


Would you like to see some? Head for Béziers, at the Fonseranes locks! This is where you will find the largest number of locks. There are eight of them, six of which are still functional.

Along the Canal du Midi, we find the Lauragais and more particularly Castelnaudary. This name may be familiar to you, as the town is famous for its famous cassoulet. Visiting the Canal du Midi is thus an opportunity to treat yourself to a gourmet break. An exhibition is even devoted to the dish, at the Lauragais Museum. The place is a former prison-court imagined by Catherine de Médicis, among others.

This is one of the must-see places on the Canal du Midi. It is here, at the threshold of Naurouze, that the highest level of the canal is located. From the beginning of the project, Pierre-Paul Riquet made the threshold a strategic place. For yes, the place is not new. Indeed, it already existed during Antiquity.


But why is it so important? Quite simply because the threshold will allow Riquet to partially supply the canal with water from the Black Mountain.

The Malpas Tunnel is also a structure that has made it possible to avoid a natural obstacle. Located in Nissan-lez-Ensérune, it allowed the canal to pass under the oppidum of Ensérune. The place is impressive, especially when you know that it is a human construction... and that it is 173m long!

The round lock of Agde

Here is another lock to visit on the Canal du Midi route. The lock of the ancient Greek city is a bit particular. Rather than having two gates, the round lock has three. In addition, the round shape of the basin allowed boats to be manoeuvred inside. This allowed them to move in the desired direction of navigation.

In the Aude part of the Canal du Midi you will find the oldest canal bridge in the world. The Répudre canal bridge was, moreover, the only one originally planned by Riquet. Riquet was therefore particularly proud of this work, which allowed the Répudre to be spanned. Its history thus makes it one of the key places to visit on the course of the Canal du Midi. Don't miss it!

Originally, visiting the Canal du Midi did not include a passage to Carcassonne. It was only long after it was put into service, in 1810, that the Canal du Midi was to include a new section. This time, the watercourse does indeed pass through the medieval city. Today it would be a pity, if you visit the Aude section, not to stop in Carcassonne. The opportunity to discover the most famous fortifications in France.

The Cathar castles and the Black Mountain

An important part of the Canal du Midi crosses the Cathar country. This region is steeped in history, since it is here that the dissidence towards Catholicism has been the strongest. A movement which led the Kingdom of France to go to war against the so-called "heretics".

Discover in particular the numerous castles and villages of the Black Mountain. Among the many places to visit, don't miss the castles of Lastours and their belvedere. The panoramic view is breathtaking.

How to visit the Canal du Midi?

Boarding a barge is obviously the best way to visit the Canal du Midi. Many tourist operators offer cruises on part of the route. You can also decide to rent a boat and sail freely, at the pace you wish. In any case, you will be amazed.

For the more sporty, there are numerous trails along the water's edge. It is therefore possible to visit the Canal du Midi while pedalling under the Languedoc sun. You will easily find a mountain bike rental on any section.

If you are a keen walker, the Canal du Midi is a perfect setting for a hike. Among the most suitable places, we recommend the route of La Caunette, in the heart of the Montagne Noire. You will be able to discover the threshold of Naurouze during the walk.

Here is the most unusual activity to visit the Canal du Midi. Thanks to the waterbike, you will combine the sporting pleasure with the privilege of navigating on the canal. So, ready to pedal? For that, you will have to pay around 60€.

Looking for speed? Opt for a motorized getaway, with one of the most beautiful backgrounds in Occitania. But be careful: look ahead so as not to pick up a plane tree! Quad excursions last between one and three hours. Count about 50€ per person.

Fly over the Canal du Midi

Why not take a little bit of height? Indeed, it is possible to observe the Canal du Midi from an aerial point of view. Whether you're commuting, paragliding or paramotoring, you'll be amazed! However, such a souvenir has a cost. Count 85€ to offer you this unforgettable spectacle.

How to get to the Canal du Midi?

The Canal du Midi crosses a huge part of the Languedoc region. The accesses are thus multiple. To get to the region, here are the towns that make access easier:

If you choose to reach the region by plane, use a flight comparator like Skyscanner to find the best offer. The platform will show you the best solution according to your criteria.

Moving along the Canal du Midi

Then, to move along the Canal du Midi, two solutions are to be preferred :

Where to stay near the Canal du Midi?

To know where to sleep, you have to base yourself on the places you have decided to visit along the Canal du Midi. Depending on your choices, everything will be clearer. On our side, here are the cities we advise you. These cities are used to receiving a tourist influx and are close to many places of interest :

Whatever the destination, you will find all types of accommodation: hotels, gîtes, Airbnb, campsites or even unusual accommodation. To find the best room, using a hotel comparator will be a non-negligible asset.

Here you are at the end of this article! You now have the most useful information to visit the Canal du Midi. It's just waiting for you!

Hotels near the Champs-Elysées in Paris – 10 best located