How can I attend an AS Roma or Lazio match at the Stadio Olimpico in Rome? 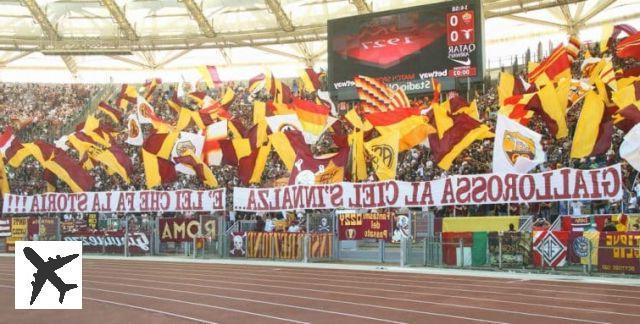 Do you want to watch a game of AS Roma or Lazio while you are in Rome? Here's everything you need to know to see a game at Rome's Stadio Olimpico!

Rome is no longer presented. The imperial city, capital of Italy, is full of monuments and museums to do. Traditions, history or gastronomy, you will find a huge number of things to do in Rome. But Rome is also a city of football. Two rivals share the heart of the Romans: AS Roma and Lazio. Attending a match at the Stadio Olimpico is therefore an activity to do to discover a true Roman passion.

The Olympic Stadium also regularly hosts matches of the Italian national team. So, do you feel like calcio? Discover in this mini-guide all the useful information you need to attend a match at the Stadio Olimpico in Rome!


History of AS Roma
AS Roma, also known as La Louve, is a Roman club founded in 1927 following the merger of four of the five Roman football clubs of the time. The club has an important record of achievements, with 3 Italian championship titles and 9 Italian Cups. The team plays in red-purple and yellow, which are also the colours of the city of Rome. Because of this, the players of AS Roma are nicknamed the Giallorossi.

The club has been playing at Rome's Stadio Olimpico since 1953. The team also has a worldwide reputation, not least thanks to its recent legend Francesco Totti, who has remained loyal to Roma throughout his career.


History of Lazio
S.S. Lazio is a football club based in Rome, founded in 1900. The club is therefore the oldest in the city. This is due to the fact that Lazio is the only one of the five Roman clubs that did not wish to merge in 1927. Its colours are sky blue and white, in homage to Greece, the founding country of the Olympic Games. As a result, Lazio players are also known as the Biancocelesti.

Like their rivals, Lazio have a rich trophy cabinet with two Italian championships and seven Italian Cups. But unlike AS Roma, Lazio have a continental trophy, the UEFA Cup, won in 1998.

How do I go to a game at the Stadio Olimpico?

Which matches should I favour?

For both clubs, the stadium is very large and tickets for the biggest games are available. Also, posters against big teams (such as Juventus, Inter or AC Milan) guarantee to see a full stadium and enjoy the best possible atmosphere. But THE match to see would be the derby between AS Roma and Lazio.

However, don't delay in picking up your tickets. Indeed, during the sales of big posters the tickets leave quite quickly.

As far as the weather is concerned, the city offers a mild climate, so all seasons are good enough to see a match. However, as the winter is colder, the chance of getting tickets increases .


Which forum to choose?


For AS Roma
In Roma matches, the tifosi are mainly found in the South Curva. If you're looking for atmosphere, this is the place to be. Beware, the tickets are going fast. Moreover, as the supporters can be virulent, we advise against this choice for families. In this case, the side stands (Tribune Monte Mario & Tribune Tevere) will be both more comfortable and more suitable.

For Lazio
For the Lazio example, we'll reverse the advice. The tifosi are in the Curva Nord, where the atmosphere will be warm. Therefore, in order to combine attractive price and atmosphere, this time it will be the Distinti Nord part to be favoured. The good value for money will be in Curva Sud.

How much does a ticket for a match at Stadio Olimpico cost?

For both teams, ticket prices are generally affordable for all competitions. However, while tickets for the big posters can start at €25, tickets at that price are scarce and will cost between €50 and €70. The price of the best pitches can go up to 100€.

Obviously, smaller posters or Italian Cup matches start at a lower price (between 10€ and 20€) and are therefore to be preferred if you don't want to pay too much.


How to buy tickets for an AS Roma or Lazio match

Online
The club offers tickets for sale directly on its official website, in the Ticket (in English)/Biglietti (in Italian) section and on the Ticketone.it website.

At the point of sale
Tickets can also be purchased at Ticketone d'Italia sales points and at the Foro Italico Ticket Office located in front of the stadium (Viale delle Olimpiadi 61).

By phone
Ticketone allows you to reserve tickets by calling their calling-center (+39 892 982).

Online
The club offers its tickets for sale on the Ticketone website.

At the point of sale
You can also buy tickets at Ticketone outlets in Italy and at the club shop.

If you don't speak Italian, here is an example of a sentence to make you understand:
In French : Bonjour, I would like three tickets for the Roma-Lazio match please.
In Italian : Buongiorno, vorrei tre biglietti per la partita Roma-Lazio per favore.

How do I get to Stadio Olimpico?


You can get to the stadium by:

Where to park near the stadium?

If you have chosen to go to Stadio Olimpico by car, there are three parking lots nearby :

These car parks are on the road. Therefore, parking fees may be charged.

Also read: Cheap parking in Rome: where to park in Rome?

Where to eat around the Stadio Olimpico?


There are almost no restaurants and fast food outlets within five minutes of the stadium. However, on match nights there are most likely to be stands and food-trucks all around the stadium.

Where to sleep near Stadio Olimpico?

The stadium is located in the Municipio XV (a Municipio is a kind of borough), in the Olympic Quarter. There are many hotels nearby, which makes it easy to sleep near the stadium. Use a hotel comparator to make your search easier.

For those who would like more typical accommodation, many Airbnb will also be available in the area. Favour the Olympic, Flaminio, Quartiere XV della Vittoria and Trieste areas.

Also read :
Where to stay in Rome? The best places to sleep

Audio Video How can I attend an AS Roma or Lazio match at the Stadio Olimpico in Rome?
Cheap parking in Bari: where to park in Bari? ❯

Why does that Sicilian mummy seem to open and close his eyes?

The 9 best outdoor activities to do in Sicily

Maps and detailed plans of Florence

Rent a jet ski on Lake Garda: how and where?

add a comment of How can I attend an AS Roma or Lazio match at the Stadio Olimpico in Rome?