With arms open and head raised towards the surface, the bronze statue of the Christ of the Abyss is one of the most beautiful diving spots in the world!

The Christ of the Abyss is surely one of the most famous underwater constructions in the world. This gigantic statue, measuring almost 2.5 meters and weighing about 260 kg, is made of bronze and represents Christ with open arms like Christ the Redeemer in Rio de Janeiro.

The origins of the Christ of the Abyss

The one known locally as Il Cristo Degli Abissi actually lies 17 metres deep in the bay of San Fruttuoso de Camogli, not far from Genoa in Italy. Nearby is the Abbey of San Fruttuoso of Capodimonte, another place of interest in the area. 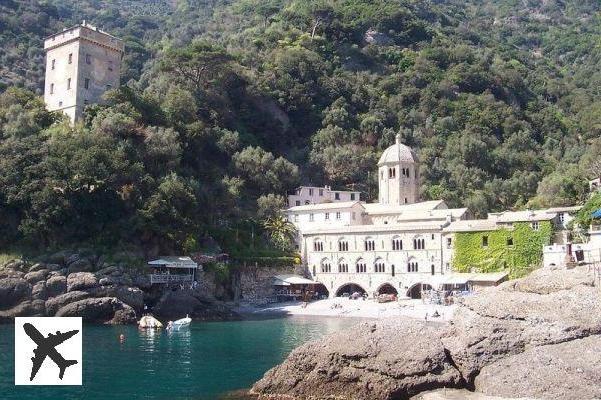 This remarkable statue, which attracts many divers every year, is far from being an archaeological relic. The famous diver Duilio Marcante wished to pay homage to his deceased friend, Dario Gonzatti who was the first Italian diver to use complete modern diving equipment. Alas, Dario died during a dive in 1947 in the Bay of Fruttuoso.

Duilio Larcante, deeply affected by the sudden death of his diving friend, took a diving suit and went to sit on a rock on a sea bed on the promontory of Portofino, in the province of Genoa.

He remained for a few moments to swim and reflect on this sudden death and thought about the different people who worked and lived from the sea and the risks it engendered on a daily basis. He noticed that there was no symbol, no stele for all these people who died at sea.

Duilio Marcante explained his project to the then president of the Italian Sports Centre, Jack Costa, to the religious authorities and received the approval of Pope Pius XII to erect the famous statue of Christ of the Abyss. It was on 22 August 1954, with the help of the Italian Navy, that the statue was removed and inaugurated at a depth of 17 metres. 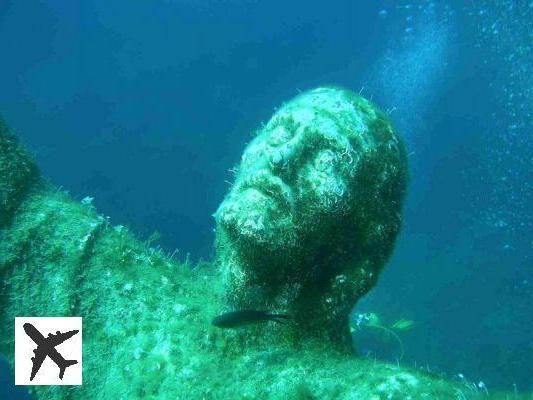 The statue of Christ of the Abyss thus represents Christ, with arms open as a sign of redemption, his head raised towards the surface of the water. Today, this statue is THE symbol and monument dedicated to all victims at sea.

Every year, on the last weekend of August, a ceremony is held to remember. The procession takes place during the night, by the light of torches alone. Divers immerse themselves in the place where Christ is standing to lay a laurel wreath.

This statue is an excellent diving spot and is the subject of many underwater visits by divers as well as anonymous people from all over the world visiting the region come to pay their respects. 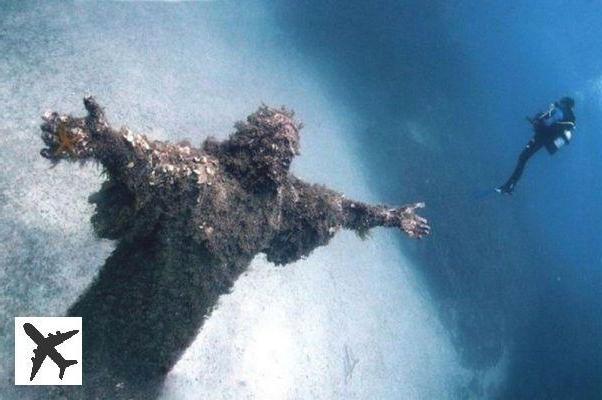 It should be noted that the original statue is made of clay and was abandoned in a foundry in Italy until 1993.

Due to corrosion and crustacean growth, the statue was brought to the surface in 2003 to be fully restored, and also to replace one of the hands that had become detached due to an anchor. It was returned to the water in July 2004 to the delight of divers around the world.

How to dive and see the Christ of the Abyss?

It is possible to dive and swim alongside the Christ of the Abyss thanks to the San Fruttuoso Diving Center.

Audio Video The underwater statue of Christ of the Abyss of San Fruttuoso in Italy
How do I get to Sardinia from Genoa by ferry? ❯