Why does that Sicilian mummy seem to open and close his eyes? 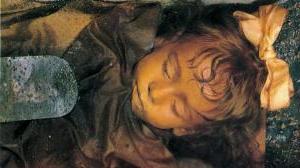 The mystery of the mummy of little Rosalia Lombardo's eye-opening mummy finally solved!

In the Capuchin catacombs of Palermo, Sicily, there is a frightening mummy of a two-year-old girl who seems to open and close her eyes regularly. An Italian anthropologist has solved the mystery of this little girl, nicknamed "Sleeping Beauty". A clue: she is not really a living dead person.

Little Rosalia Lombardo was only two years old when she died of pneumonia in 1920. Her father was so heartbroken at the loss of his daughter that he asked a local embalmer, Alfredo Salafia, to mummify her. Now displayed with thousands of other mummies in the catacombs of the Capuchins of Palermo under the Convent of the Capuchins of Sicily, Rosalia has earned a reputation as one of the best-preserved mummies in the world. But Sleeping Beauty is also famous for another reason. Every day, Rosalia seems to move her eyelids to reveal her light blue eyes, and for decades, no one had been able to explain how this was possible.

Here's a time-lapse video to show you what it looks like:

Then, finally, in 2009, the anthropologist and curator of the Capuchin catacombs, Dario Piombino-Mascali, decided that the mummy was a "real thing".

Dario Piombino-Mascali made this discovery when he noticed that the mummy's glass coffin had been moved by museum employees, shifting it slightly, allowing him to see his eyelids better than ever before. "They are not completely closed, and indeed they never were," he said. The anthropologist also managed to find the mysterious formula used by Alfredo Salafia for the impeccable preservation of Rosalia. When Salafia died in 1933, he took the secret of his preservative chemicals to his grave, and for decades no one could understand how Rosalia could be so perfectly intact after all these years.


While most of the mummies buried in the catacombs were treated by the monks and basically dried out by the dry environment, Rosalia was artificially mummified. In 2009, Dario Piombino-Mascali found a manuscript in which Salafia lists the ingredients used to mummify Rosalia. It reads: "one dose of glycerin, one dose of formalin saturated with zinc sulphate and chloride and one dose of alcohol saturated with salicylic acid".


An experienced embalmer, taxidermist and chemist, Alfredo Salafia had mixed this mixture and injected it into little Rosalia's body through a single small hole. The mixture then took effect, the formalin eliminating all bacteria, the glycerine ensuring that her body did not dry out, and the salicylic acid killing all the fungi in the flesh. The role of the zinc salts was to petrify Rosalia's body.

Now that Piombino-Mascali has solved the mystery of Rosalia's preservation and her frightening eyes, he hopes that the many visitors to the catacombs will be able to enjoy the curious mummy without going so far as to create "totally unfounded stories" about her.

Audio Video Why does that Sicilian mummy seem to open and close his eyes?
Where to sleep near Palermo airport? ❯

add a comment of Why does that Sicilian mummy seem to open and close his eyes?