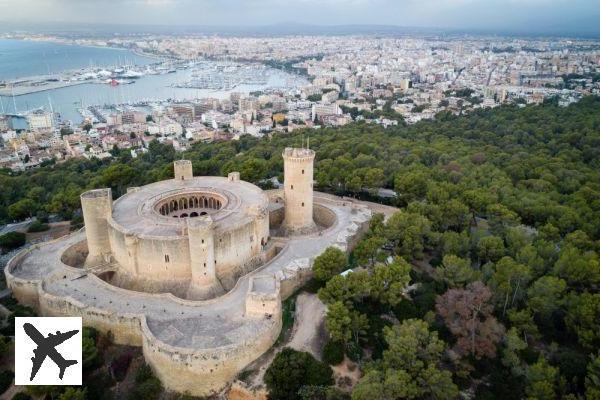 Immerse yourself in the history of Mallorca by visiting the Castell de Bellver in Palma de Mallorca! Follow our practical information guide to make sure you don't miss anything about this must-see place.

The capital of the Balearic Islands, Palma de Mallorca, offers visitors some great surprises around the walls of its old town. Three kilometres from the historic centre, leaning against a wooded hill, the Castell de Bellver is well worth a visit! Perched a hundred metres high, it offers spectacular views of the bay of Palma and the mountains. Built in the 14th century, the castle served as the residence of the King of Aragon James II, before becoming a prison in the 16th century. Its imposing architecture is unique in Spain. It is circular in shape and built in a Mediterranean Gothic style. The building also houses the interesting museum of the history of the city of Palma. Occasionally, concerts of classical music or jazz are given within the castle grounds. A magical and timeless moment not to be missed!

Whether you are a fan of medieval architecture or a lover of cultural venues, the Castell de Bellver is a must during your stay in Palma de Mallorca! Discover in this article all the practical information you need to know before your visit.

Also to be read: The 12 must-do things to do on the island of Mallorca

History of the Castell de Bellver

Among the buildings built in the course of Spanish history, the Castell de Bellver is undoubtedly one of the most original. King James II of Aragon, known as "the Just", ordered the construction of the castle at the very beginning of the 14th century. The sovereign, who was suffering from tuberculosis, wanted to live in a healthy and salubrious residence. He therefore commissioned the architect Pedro Salvá to direct the construction of the royal fortress. It took almost forty years to complete the building, which has a peculiar circular shape. Even today, there are only four other castles of this type in Europe.


The place was later occupied by James III of Mallorca, before it was defeated by King Peter IV of Aragon in 1343. He turned part of the fortress into a prison for the family of his defeated enemy. He himself lived in the castle during the plague epidemic in Barcelona.

From 1717, the Castell de Bellver de Palma became a military prison. Among the personalities who stayed there were Gaspar Melchor Jovellanos (1744-1811), a famous Spanish politician, and François Arago, who was imprisoned there in 1808 during the Franco-Spanish War. In 1821, the castle was temporarily used to make coins. The Spanish Civil War (1936-1938) marks the last episode of detention. More than 800 republicans were then imprisoned there. In 1931, the State ceded the building and the surrounding forest to the Palma City Council, which set up the City History Museum. Today, many cultural and recreational activities are organized by the municipality.

What to see and do in Castell de Bellver?

By visiting the Castell de Bellver de Palma and its museum, you will travel through the history of the Balearic Islands, from the Talayotic civilisations to the 20th century. The castle is sure to delight lovers of Spanish culture. Guided tours and audio guides make the visit exciting. Some evenings, classical music or jazz concerts are given in the central courtyard. Don't miss the opportunity to enjoy this timeless experience!

The castle was designed as a fortress palace where rulers could take refuge in case of danger and sovereigns could make more or less prolonged stays. The elegant and refined taste of the royal residence bears witness to this dual use. The entire building has an original plan. The three towers of seven metres each and the keep are placed facing the four points of the compass. The keep, also known as the Tribute Tower, stands fifteen metres high. It faces north and is separated from the rest of the building by a moat, to serve as a fallback point in case of an attack on the castle. In the centre there is a two-storey central courtyard, whose pointed arches and roof are characteristic of the Gothic style.


The moat surrounding the castle was built in 1330 to prevent the offensive forces from approaching. During your visit, small exhibition rooms lead you to the main room, a large, ornate round hall. Information boards provide a better understanding of the history of the castle and its construction.

On the first floor, the gallery serves a large number of rooms, including the Throne Room, the Jovellanos Room and the chapel of St. Mark, the patron saint of the castle. You can then climb small stone steps to access the balcony and the roof. From the top, the view of the bay and the mountains is breathtaking, ideal for beautiful panoramic photos. It is not for nothing that its name comes from the medieval Catalan bell veer, which means beautiful view!

The collection of Roman statues

The arcades on the ground floor feature Roman statues bequeathed by Cardinal Despuig (1745-1813). The son of the Counts of Montenegro and an artist familiar with the intellectual circles of the time, the cardinal was one of Mallorca's most prominent figures. During his years of residence in Rome, he built up an important collection of sculptures, much of which came from excavations in the region. The Palma City Council acquired the collection in 1923, with the help of the Archaeological Society of Lul-liana and the intelligentsia of Mallorca.

The Museum of the History of the City of Palma

Visiting the Castell de Bellver de Palma allows you to follow the different eras that the city has known since its foundation in 123 BC. Eight rooms shed light on thefascinating history of Palma and its chronology: prehistory, the Muslim conquest, the establishment of the Kingdom of Mallorca, the construction of the Renaissance ramparts, until its demolition in 1903. The photographic panels show some of the architectural remains found in the basements of the Episcopal Palace when the city was under the yoke of the Roman Empire. The room dedicated to the Muslim period shows the hydraulic system and the city plan typical of a medina. A little further on, we learn that the Gothic style of the cathedral is the result of the conquest of the city by James I on December 31, 1229.


How do I get to the Castell de Bellver in Palma de Mallorca?

Several footpaths in the middle of the woods lead to the monument. Beware, there are many steps to reach the top and the walk can be tiring especially if it is hot!

The tourist bus stops in front of the Castell de Bellver and also allows you to easily visit other points of interest in the city.

If you come by car, free parking is available.

Tickets are available until 45 minutes before closing time.

Things to do in Formentera, the hideaway in Ibiza

Cheap parking in Cádiz: where to park in Cádiz?