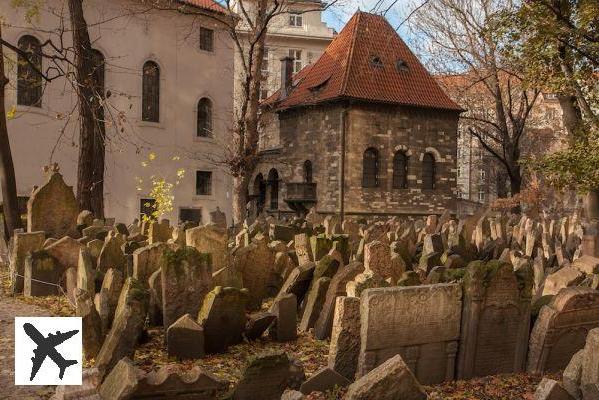 Visit the Jewish quarter of Prague: discover the Jewish Museum of Prague, the Old-New Synagogue and other relics of the Josefov quarter!

Former Jewish ghetto of the city of Prague, the Josefov district or Jewish quarter is one of the oldest in Prague and especially in the Old Town. This neighborhood has seen one of the largest Jewish communities in Central Europe flourish, with a rich and eventful history.

Only a few symbols remain of it: synagogues, museums and cemeteries. To discover them is to travel through the history of Bohemia and Europe.

The history of the Jewish quarter of Prague

The history of the Josefov district begins with the arrival of the first Jews in Prague in the 8th century. Initially scattered all over the city, the community decided to gather in the Old Town. Benefiting from an autonomous jurisdiction, the Jewish population will alternate between periods of persecution, where they suffer pogroms, discrimination and expulsions, and periods of prosperity, as at the end of the 16th century and the beginning of the 17th century.

This lenient period coincided with the life of the mayor of the neighborhood, Marcus Mordecai Maisel, Minister of Finance of the kingdom, who, thanks to his fortune and generosity, was to develop the Jewish neighborhood. We owe him the famous Maisel synagogue that bears his name. It was also at this time that the myth of the Golem was born!

The Jewish quarter will take the name of Josefov in the 18th century, another great period of prosperity, when Emperor Joseph II will publish a decree of tolerance in 1781.

During a visit to Prague's Jewish Quarter, you will learn that it was largely demolished at the beginning of the 19th century, following an initiative inspired by the Parisian Haussmann model, which aimed to clean up and remodel the city. Josefov was then cut in half by the long avenue de Paris (Pařížská), which runs from the Place de la Vieille-Ville to the Vltava in the north. Only the six synagogues, the old cemetery and the town hall remain of the old Jewish quarter. Because of this renovation, it is difficult to discern the old appearance of this district today.


How to visit the Jewish quarter of Prague?

The main points of interest and sightseeing in Prague's Jewish Quarter are :

Where can I find the Josefov district? How to get there?

The Jewish Museum in Prague
Born as a result of the redesign of the Jewish Quarter, the museum has one of the most important collections in the world concerning the history, customs and traditions of the Jewish community in Bohemia and Moravia. The museum is divided between the historical synagogues (Klaus, Maisel, Spanish, Pinkas), please do not hesitate to take advantage of a guide to visit them.

The Old-New Synagogue
It is one of the oldest Gothic buildings in Prague. The cult is still celebrated there nowadays. It can be visited independently of the other synagogues, which are administered by the museum and the Jewish community.

The Jewish quarter is juxtaposed with the tourist areas of the Old Town. A tour of this quarter is a great idea to discover the history of Prague and its Jewish community, which is gradually being reborn.

Audio Video Visit Josefov, the Jewish quarter of Prague
Prague in 3, 4 or 5 days: our itineraries for a stay in Prague ❯

add a comment of Visit Josefov, the Jewish quarter of Prague