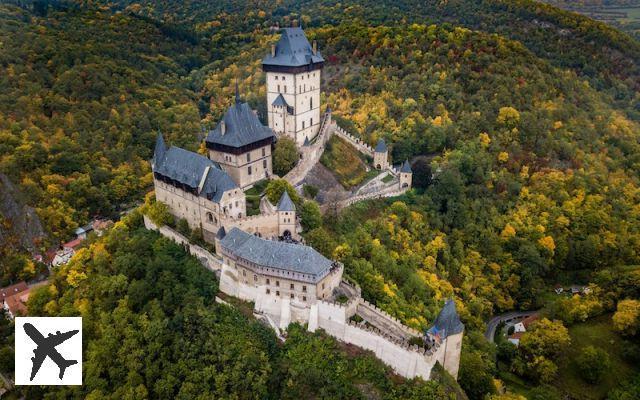 Located less than an hour by train from Prague, Karlštejn Castle is one of the most important castles in Bohemia and a jewel of Gothic fortified architecture. The castle is the place where the jewels of the Royal Bohemian Crown, the Imperial Crown of the Holy Roman Empire and various holy relics were kept.

The castle also offers a magnificent view of the Central Bohemian region. From Karlštejn, a short hike takes you to Prague's "canyons" - a series of old quarries, the largest of which is Velká Amerika.

Built between 1348 and 1357, Karlstein Castle (in German) served both as a stronghold to house the precious relics of Emperor Charles IV and as an imperial residence where he could rest, hunt and receive important visitors.

At the beginning of the Hussite (Protestant versus Catholic) wars, the Czech Crown Jewels, which had been housed in Prague Cathedral until then, were transferred by Emperor Wenceslas I to Karlstejn Castle to protect them from Hussite insurgents, who even besieged Karlstejn in 1422 - without success.

With the end of the Hussite Wars in 1436, the great era of Karlstejn Castle came to an end: the Bohemian kings stopped visiting it.

From 1877 to 1899, the castle was renovated again: Emperor Franz Joseph I ordered a historicizing - or purist - reconstruction, which gave the castle its present appearance.

From 1891 the mining of limestone in the Karlstejn region also began. Already used for centuries for the construction of historic buildings in Prague, limestone gained importance in the 19th and 20th centuries. The quarries give rise to Prague's famous "canyons", including Velka America. They closed in 1963 and were transformed into water reservoirs. Today, it is possible to visit them on a short hike - a good way to discover the Czech nature and landscape.


Visit Karlstejn Castle and the Czech canyons of Velká Amerika.

To visit Karlstejn Castle, you will have to cross the town to the castle hill. In the town there are many typical Czech restaurants.

There is a charge for the interior of the castle, but access to the first inner courtyard and the ramparts is free of charge. From these you have a wonderful view of the Central Bohemian region and the surrounding forests.

The hike to the Czech canyons of Prague starts from the city or the back of the castle. It is accessible to everyone, so it takes two to three hours to get to the Velká Amerika Canyon (the most remote and beautiful) and back to the castle.

How to visit Karlstejn from Prague? Timetable & Prices

Visiting Karlstejn from Prague is easy. To get there, we advise you to use the train: there are many connections from Prague Central Station (Hlavní Nádraží), sometimes every half hour for only CZK 102 round trip (4€). You can book your train ticket on the company's website.

From the Karlstejn train station, it is only a 5-minute walk to the city and you can start the small ascent to visit Karlstejn.

The opening hours of the castle vary throughout the year :

Two tours are possible inside the castle: the basic tour at CZK 330 (13€) or the exclusive tour at CZK 880 (35€) to visit the sacred rooms of the castle (including the Chapel of the Holy Cross).


Please note that you can also book online the excursion to Karlstejn Castle from Prague with a guide (especially in English). The excursion includes the visit of the castle with the guide as well as transportation from your hotel in Prague.

The 6 best cocktail bars in Prague

Cheap parking in Prague: where to park in Prague?

add a comment of Visit Karlstejn Castle from Prague