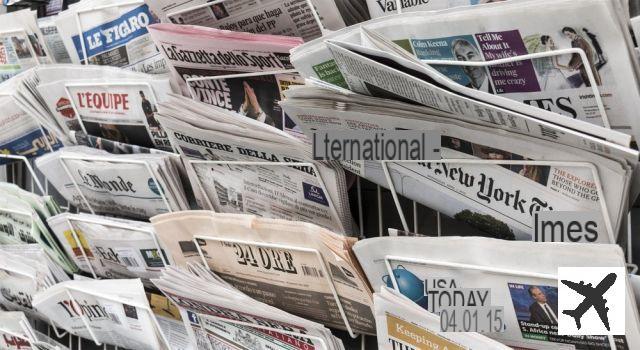 Nowadays, knowing how to speak English is an undeniable asset, whether in the world of work, travelling or meeting people. Unfortunately, the majority of French people have difficulty understanding or expressing themselves in English. To learn English easily, Génération voyage has concocted a list of 15 British and American newspapers to read in order to progress in English.

The New York Times is undoubtedly the most prestigious of the American newspapers, and is undoubtedly the most prestigious of the American gazettes. Founded in 1851 in New York City, it was originally the New York Daily Times. It is only six years later that its name was changed to the present one. A monument to English-speaking culture, the newspaper even won the Pulitzer Prize in 1918 for its articles on the First World War. Its worldwide fame and prestige are all reasons why you should definitely read this newspaper.


Furthermore, to improve your English language skills, reading The New York Times is recommended. Indeed, very instructive, it immerses you in American political news. Thus, while enriching your American culture, you will learn new words that will expand your vocabulary.

This English-language newspaper, a reference across the Channel, allows you to progress in English expressions. Thanks to its free tone, you will learn vocabulary but also grammar which will help you to be at ease when speaking. Moreover, reading The Guardian also allows you to form a political and economic opinion...in short, a current opinion on our Breton neighbours.

One of the best British and American newspapers to read in order to improve in the language of Shakespeare is undoubtedly The Washington post. This daily newspaper created in 1970 in Washington is an institution in the United States.


Very reputable, this newspaper carries out a number of investigations that undermine the news: we still remember the Watergate scandal. Considered as an independent investigative newspaper, the daily is not afraid of debate! Génération Voyage advises you to read The Washington post because it will allow you to develop critical and political reflections.

Founded in 1785, it is the oldest British daily newspaper! Because of its notoriety and longevity, it amply deserves its place in our ranking of the best British and American newspapers to read in order to progress in English. The Times is therefore an institution in the United Kingdom.

The Times is first and foremost a read for the general public, so as a learner, it is easy for you to read it. You can start with The Times as an introduction and then move on to political or economic newspapers. Thanks to this English-language newspaper, you will make rapid progress, learn a lot about current affairs and culture and, of course, enrich your vocabulary! So what are you waiting for to read British and American newspapers?

When people talk to you about British and American newspapers, you think directly of The Wall Street Journal or The Times. However, don't forget USA Today! This magazine is, indeed, one of the favourites of Americans because it is close to their concerns.

USA Today is ideal for improving your English because the style is simple, which makes it easy to read. In short, you won't even realize you're working!

Famous English tabloid, we no longer present The Sun which is part of the essential British newspapers. It is probably the most widely read newspaper in England, but certainly not the best. Indeed, this tabloid magazine is more known for its polemical content than for its style. Nevertheless, Génération Voyage recommends it because it is one of the best-selling British and American newspapers in the world!

Moreover, by reading The Sun, you can improve your vocabulary as well as your typical expressions. You should treat this magazine as an exercise that allows you to acquire everyday words. All in all, thanks to this English-language press, your linguistic exchanges will be more authentic and typical.

This weekly is a reference magazine in the British and American newspaper world! The New Yorker offers a collection of reports, short stories, poems, satirical drawings, essays, comic strips, fiction and literary works that highlight New York culture. If you're a fan of the Big Apple, you'll be thrilled.

Learning a language with the press of a foreign country ensures better understanding and expression during language exchanges.

Moreover, its style and vocabulary are quite simple so you won't have any difficulty understanding this magazine.

It is one of the best known British and American newspapers, especially due to its famous cover with its red border. It is also known because it is the newspaper that establishes the personality of the year. Time Magazine is a must for the English-speaking press.

Its content covers national and international news. It is therefore ideal for keeping abreast of the facts around the world. While learning English, you will discover world news. Without even realizing it, you will become bilingual in record time.

Génération Voyage recommends this newspaper because you will learn more about British society and politics.

To create a list of the best British and American newspapers, it is impossible to miss The Wall Street Journal! An economic and financial newspaper, it is the world's best-selling daily newspaper in the stock market sector. Like The New York Times, it too has won numerous Pulitzer Prizes, which have earned it its current renown.

If you're interested in numbers, you'll love this paper. In addition to teaching you technical English, it allows you to learn about the world of business.

The Daily Telegraph is a major British daily news paper. Founded in 1885, it was first called Daily Telegraph and Courier and later took its current name. It should be noted that a Sunday version called The Sunday Telegraph exists.

The Sunday Telegraph is the daily newspaper of reference among British and American newspapers, its content deals with current events and general information. Ideal to start learning English, we recommend it to you! Indeed, its vocabulary is basic and its academic grammar, so you will have no problem understanding the meaning of the articles.

To learn English, you need to know the specifics of each country. The Irish press allows you to understand typical expressions and Irish pronunciation (if you listen to the interviews). In short, we recommend that you extend your reading to all English-speaking countries in order to understand the particularities of each nation.

Its varied content allows you to learn more about the world, such as who the most influential women are, the best cities to move to or the most dynamic companies.

The Atlantic is the latest and yet not the least of these top newspapers. This cultural magazine has a rich and varied content. It is particularly known for having seen in its columns texts by Mark Twain and Martin Luther King.

You will learn English while studying politics, economics or foreign affairs. What more could you ask for?

Now you know the best British and American newspapers to improve your English! Enjoy reading!

How do you say "Goodbye" in all languages?

How do you say "Hunger" in all languages?

How do you say "Happy Birthday" in all languages?

How do you say "Friend" in all languages?