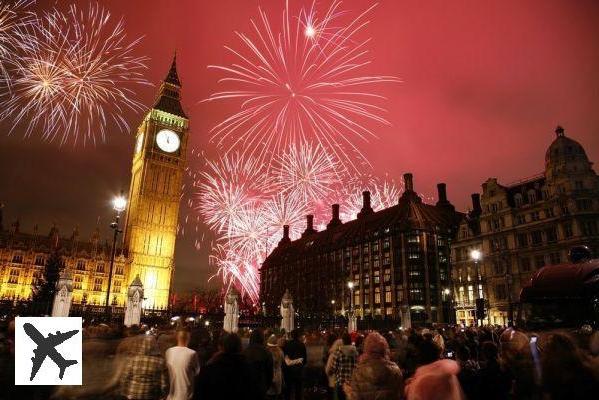 Do you want to mark the transition to the year 2020? Be sure to have an extraordinary evening by choosing one of the 13 best destinations in Europe where to celebrate New Year's Eve!

This year, you've decided to spend an unforgettable New Year's Eve and to spice up the holidays, you're thinking of getting out of France... But which destination should you choose? Whether you're planning to spend a traditional New Year's Eve party with your family, dance like crazy with your friends or go on a romantic getaway with your significant other, the continent is full of possibilities!

Are you ready to discover them? Here are the 13 best New Year's Eve destinations in Europe!

Also to be read: The 12 best ski resorts where to celebrate New Year's Eve in Europe?

Be there when Big Ben rings in the last hours of the year! Europe's largest city is known to be particularly lively, and New Year's Day is no exception. Not to mention the fact that London is within easy reach thanks to the Eurostar...

Whether you prefer the trendy Soho district, the punk and techno atmosphere of Camdem Town, the cultural and retro appeal of Shoreditch (and many others), you'll be spoilt for choice for New Year's Eve. In short, London is an ideal destination for those who want to party and meet people, but don&#8217t be afraid of crowds!

Barcelona is famous for its exciting nightlife, the scene of many parties and encounters.

Several options are available to you to enjoy the last night of the year... But feel free to try them all to prolong the fun. Spend New Year's Eve outdoors in the city's biggest squares, try one of its many roof-tops or choose the more traditional route by opting for a tapas bar. Follow the Spanish custom: at each of the last twelve bells of the year, swallow a grape!

Heading to Poland to discover some of the most traditional end of year festivities in Europe. Krakow has a rich Christian past: Christmas and New Year are taken very seriously! The streets and monuments are lined with light, the Christmas market is simply fantastic and the architecture and the carriages that criss-cross the city make it look like a fairy tale.

Beyond this magical atmosphere, Krakow is a city where people know how to party! For New Year's Eve, you can choose from the many pubs and discos that liven up the streets of the city centre.

In Scotland, the celebration of the New Year's Day is said to go back to pre-historic Celtic traditions: the Hogmanay. And we might as well tell you that in Edinburgh, we don't joke about the Hogmanay! The festivities attract hundreds of thousands of visitors every year, who come to sample this explosive cocktail of local customs and modern nightlife.

In particular, the capital's main avenue, Princes Street, is a real festival in the city. To take part in the street party, however, you will need to buy a ticket in advance. Otherwise, you can enjoy the Ceilidh Scottish dance shows or the Shetland Viking torchlight procession.

Are you looking for an original destination among the best destinations in Europe where to celebrate New Year's Eve? Visit Reykjavik, the Icelandic capital. Here, fireworks are a real institution, so expect to be in for a real treat! Bars and discos stay open all night long to promise you an unforgettable evening.

During your stay, why not book an excursion to get - perhaps - the priceless chance to see the Northern Lights? A great way to start the year, isn't it?

Amsterdam is home to some of the best techno clubs and festivals on the continent... So it's only natural that Amsterdam is one of Europe's best New Year's Eve destinations!

Whether you want to take advantage of the capital's trendy clubs, take in one of the many heritage squares or rub shoulders with the Awakening, a particularly renowned electro festival with a program full of little onions... You're likely to have one of the best evenings of your life!

If you want to spend the holidays in the sun, Lisbon is perhaps the best destination in Europe to celebrate New Year's Eve. Indeed, temperatures rarely fall below 10 degrees in the Portuguese capital.

Lisbon is a beautiful city with a particularly warm atmosphere, and this, in all seasons. On New Year's Day, the festivities take place in the Plaza del Comercio: a huge concert is given, gathering thousands of people in a festive and friendly atmosphere. After the fireworks, head to Santo Amaro Docas, the old docks of the Tagus estuary. There you will find the most popular clubs of the city!

Are you looking for a romantic destination to celebrate New Year's Eve in Europe? "The city of a thousand towers and a thousand steeples" exudes an irresistibly romantic charm. Its colourful Baroque monuments, Gothic churches and cobbled streets make it a destination of choice for lovers - but not only, of course!

An atmosphere that lends itself particularly well to the festive season... Go to Old Town Square to admire the fireworks, then near Wenceslas Square to take advantage of the many bars and discos in the area.

If you want to go on a New Year's Eve trip, why not head to Ukraine? The country has the peculiarity of celebrating the New Year twice: on January 1st and February 14th. All in all, twice as many festivities await you!

Celebrating New Year's Eve in Kiev means discovering a unique historical and cultural wealth and getting lost in the Slavic traditions still vibrant with life. A trip you won't forget!

Aah, Rome! Caput mundi is bursting with treasures, whether they stand out in plain sight or hide in the city's cobbled streets. But beyond its incredible wealth, Rome is undoubtedly one of the best destinations in Europe to celebrate the New Year.

On December 31st, all the monuments light up and Italians celebrate Capodanno in Piazza, i.e. New Year's Day in the squares. The Piazza del Popolo is the most lively of all, and you can admire magnificent fireworks to welcome the New Year!

Why is Berlin one of the best New Year's destinations in Europe? Because this is where one of the biggest street parties in the whole of Europe takes place, attracting around one million visitors every year!

The Brandenburg Gate hosts the New Year's Eve festivities: from there you walk along the Strasse des 17 juni to the Victory Column. Shows, music, lights, all these activities end with a prodigious fireworks display. After midnight, head for the Prenzlauer Berg or Kreuzberg districts. Keep in mind that Berlin's best clubs are hidden away, giving them an underground atmosphere that is unique to the capital.

What destination is more romantic than Vienna? For New Year's Eve, the city is decked out in lights, offering visitors a spectacle of great beauty. You are invited to follow the Silvesterpfad (the New Year's Way), in the historic centre, to take part in all the activities taking place there until the early hours of January 1st.

Start the year with a ball in the Imperial Palace, dance on a barge on the Danube or enjoy a classical music concert at the Vienna State Opera. Of course, you can also enjoy one of the many bars and discos in the city.

Audio Video The 13 best New Year's Eve destinations in Europe
We are a group of friends and... we love to travel! That's why we have created ForTravelovers.com, a website designed to share our experiences so that you too can travel around the world. Here you will find advice so that you can organize a trip in an easy and safe way; moreover, we will recommend you essential places in the world so that you know what to do and what to see in each destination. Here your trip begins! 😉
The 11 best ski resorts in Europe where to celebrate New Year's Day ❯

5 places to do via ferrata in the Cévennes

What to do if your flight is cancelled or delayed?

The best treks to do in the world

The Great Mosque of Samarra in Iraq

Where to sleep around the Everglades?