The 14 most beautiful places to visit in Haiti 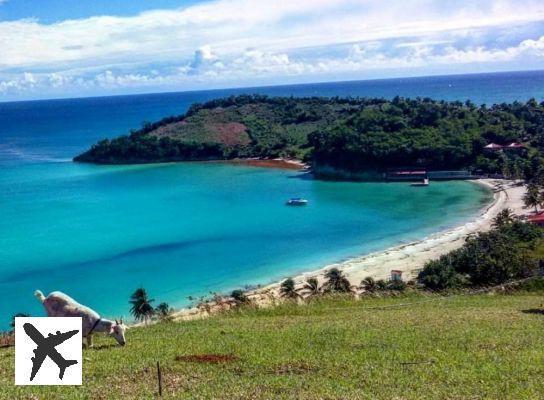 Discover our selection of the most beautiful places to visit on the wild island of Haiti, once known as the Pearl of the Caribbean!

Haiti, or Ayiti in Haitian Creole, would mean "land of high mountains" or "the mountain in the sea". This country of the Greater Antilles, with a population of nearly 11 million, shares an island with the Dominican Republic in the Caribbean Sea. The Republic of Haiti was created in 1804, following the defeat of Napoleon Bonaparte's army at the Battle of Vertières, thus becoming the first black republic in the world!

With its sublime landscapes, composed of waterfalls, caves, forests, mountains and magnificent beaches, its voodoo practices, its colourful naive art and its culture, Haiti has always fascinated people. But the high rate of poverty and the terrible earthquake of 2010 drove many tourists away, before gradually opening up again to travellers. The wild island with its tropical climate, once nicknamed the Pearl of the Caribbean, is a true paradise of biodiversity and has not lost any of its beauty, proof in this article on the 14 most beautiful places to visit in Haiti!

Please note: Due to major political and social unrest, you should still exercise the utmost caution when visiting Haiti.

This small island in the Caribbean Sea is a commune of Haiti that covers an area of almost 46 km2. Ile-à-Vache, which was a den of pirates in the seventeenth century, including Captain Morgan, is a real little corner of paradise where nature imposes itself and cars have no place. In many ways, île-à-Vache resembles the idea of an island paradise: turquoise water and fine sand with lush vegetation as a backdrop.

Are you planning to visit Haiti and looking for a peaceful destination where you can relax? Head for Île-à-Vache!

2. The National Park of La Visite

La Visite National Park, covering an area of 30 km2, is one of the things to do in Haiti. Created in 1983 with the aim of fighting deforestation by protecting the flora, the pretty hilly park with lush vegetation belongs to the La Selle Biosphere Reserve, listed by UNESCO. It notably shelters the largest pine reserve in the country and the village of Seguin, perched at an altitude of 1800 metres. Here the palm trees have given way to firs and pines, and the landscape contrasts with everything else that can be seen elsewhere in the country.

It is also in the National Park of La Visite that the highest point of Haiti is located, the Pic de La Selle (2680 meters). We can only recommend that hiking enthusiasts explore this area!

This 19 kilometer long coast is named after the Arcadin Islands located off the coast. Many hotels have settled on the Côte des Arcadins, and it is not surprising when you see the beauty of its fine white sandy beaches, behind which stand majestic mountains. Prepare your mask and snorkel and go in search of colourful fish in a crystal-clear sea, unless you prefer to take a boat trip?


Nearby there are many banana plantations and other crops, as well as fishing villages.

If you plan to visit Haiti, Jacmel is a must! At the end of a winding road through the mountains and tropical forest, you will find this colorful port city known for its artistic richness (Unesco Creative City).

Go there to meet the local artisans, stroll along the landscaped seaside promenade, and have a good time on its magnificent beaches, such as La Saline, Raymond des Bains, Ti Mouillage or the Congo Beach. Black or white sand, there is something for all tastes, and they have the advantage of being less crowded than those of Port au Prince.

We now head for Milot, in the north of the country, to admire the remains of the National Historical Park of Haiti, recognized as a UNESCO World Heritage Site since 1982. It is a grouping of three impressive sites:

- The Citadelle La Ferrière, a huge fortress erected at the beginning of the 19th century, which rises to an altitude of 900 metres, making it the largest fortress in the Caribbean. At the top, the panoramic view of northern Haiti and the Caribbean Sea is breathtaking!
- The ruins of the Palais Sans Souci, the former residence of King Henri Christophe ravaged by earthquakes in 1842 and 1843.
- The fortified site of Les Ramiers, a plateau containing the ruins of a fort, covered with vegetation until 1972.

The Bassin Bleu, or Basenblé in Haitian Creole, is a superb natural site located near the city of Jacmel, in the mountains. It is composed of three turquoise water basins (Bassin Yes, 4.6 meters deep, Bassin Palmiste, 17.4 meters deep and Bassin Clair, 22.8 meters deep), into which waterfalls, some of them spectacular, flow. Surrounded by lush vegetation, caves and fruit trees, these cool water basins are perfect places for a swim in an enchanting setting!

Wondering what to do in Haiti? We suggest you take a trip to Camp-Perrin, in the south, where you will have the chance to admire Saut-Mathurine, one of the largest and most beautiful waterfalls in the country. 27 meters high and about 30 meters wide, this incredible waterfall stretches over the Cavaillon River and flows into a natural basin where it is possible to swim. Ideal after a hot day visiting the surroundings!

For the anecdote, its waters are used to produce electricity and thus supply the towns of Camp-Perrin and Maniche.

Ready to discover the longest natural excavation in the Caribbean? It is the Marie-Jeanne Grotto, a veritable underground labyrinth of several kilometres long with about 56 chambers, whose formation dates back nearly 60 million years. The interior of the cave is covered with speleothems, limestone formations typical of tropical caves.

This natural treasure, located on a hill at an altitude of 120 meters in the southern city of Port-à-Piment, is one of the things to do in Haiti!

You will find the villages of Kenscoff and Furcy in the mountains, almost 48 kilometers from Port-au-Prince, the capital of Haiti.

To take full advantage of the sumptuous landscapes of this region, we advise you to hike there, or simply to stroll around. This place will undoubtedly please the adventurers hiding among you!

Why should you go see the Cascade Saut-d'Eau if you plan to visit Haiti? Because the supposed magical virtues of this beautiful and dizzying waterfall make it a sacred place emblematic of voodoo practices on the island! Its waters come from the Terrible Mountain, also considered a sacred place for Catholic and voodoo believers. The Saut d'Eau waterfall is located in the district of Mirebalais, in the heart of the country.

Gonave is a Haitian island of about 690 km2 located in the gulf of the same name. Many travelers come to admire its extraordinary seabed and hike in the heart of its mountainous and desert landscapes, although the island is devoid of any tourist infrastructure.

Some of its sublime beaches are sometimes visited by colonies of pink flamingos and this spectacle is undoubtedly worth seeing. In other words, visiting Gonave Island is making sure you have a memorable, almost timeless experience.

What can you do in Haiti to take your eyes away? Explore one of the most important biodiversity conservation areas in Haiti and the Caribbean, Macaya National Park! This 20 km2 park is part of the Massif de la Hotte and encompasses two Haitian peaks which are the peak of Formon (2219 m) and the peak of Macaya (2347 m). It is one of the last primary forests in the country, and its tropical rainforest is home to endemic species, which explains the importance of protecting this endangered treasure.

Labadie, or Labadee, is not only the name of a famous private seaside resort, luxurious and very popular with tourists, it is more generally a bay formed by a paradisiacal peninsula. Located a few kilometers northwest of Cap-Haïtien, the bay of Labadee and its turquoise waters are overlooked by beautiful mountains.

If you plan to explore this part of the country, take the opportunity to take a stroll in Cap Haïtien, or on the natural site of Île-à-Rat, also called Amiga Island! The latter is an islet composed of a small virgin forest and white sand surrounded by crystal clear water from which visitors are invited to go diving, kayaking or simply relax on the beach.

Don't miss Turtle Island if you are about to visit Haiti! This small island in the West Indies (less than 180 km2) owes its name to Christopher Columbus because of its sea turtle shape. Submerged by a hurricane in 2004, Turtle Island and its mountain finally reappeared in the middle of the ocean. The cinema (Captain Blood by Michael Curtis, the Pirates of the Caribbean film series...) have notably made it a mythical island by using it as a set and staging it!

Go and discover this wild and mysterious island, and judge for yourself!

The 8 most beautiful places to visit in Zimbabwe

What to do in Iran

Symphony of the Seas: What It's Like to Travel on the World's Largest Cruise Ship