The 13 must-do things to do in Cannes 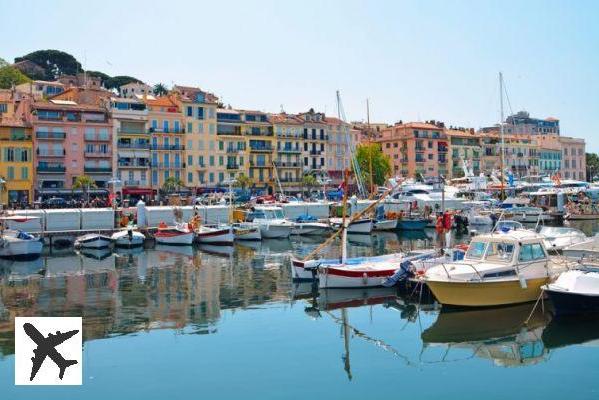 On a weekend or a holiday on the French Riviera? Make a stop to visit Cannes! The Croisette is waiting for you!

Cannes has linked its name to the world of cinema, and this long sequence shot has been going on since 1946. Moreover, it is mainly thanks to its film festival that the city is today world famous. However, a visit to Cannes is not only walking on the mythical red carpet during a social gathering. In the shade of glitter and paparazzi, Cannes has kept its authentic and Provencal charm. So let's go for a close-up on the 13 must-see places to visit in Cannes!

"Suquet" means "summit" in Provençal, and this name is not insignificant! Indeed, the oldest district of the Canois is located on the Mont-Chevalier. From here, the view of the bay and the inland is breathtaking. The panorama starts from the Quai Saint-Pierre and goes all the way to the Old Port.


This shady area provides the much sought-after coolness on hot summer days. Venture into the narrow, steep streets of the old town. Climb up to the church of Notre-Dame d'Espérance and admire the most cinematic panorama of the city.

The Boulevard de la Croisette, which is inseparable from the identity of Cannes, forms a long promenade lined with palm and pine trees. Reminiscent of the Promenade des Anglais in Nice. This sophisticated place elegantly connects the beach and the city. While on one side there are the fine sandy beaches, on the other there are many luxury brands, but also large hotels and palaces.

You can't visit Cannes without strolling on the Croisette. This mythical promenade runs along the bay of Cannes for three kilometres. Under the warm sun of the South of France, it forms a landscape worthy of a postcard.

At the foot of Mont-Chevalier stands the Old Port of Cannes and the Quai Saint-Pierre. Now emblematic sites, they retrace the history of the city of Cannes, once a fishing village.

On the edge of an idyllic waterfront, the Old Port enjoys a privileged location. Originally, it was only used for trade and passenger transport. However, having grown over the years, it has now become a marina that houses prestigious sailing boats. To visit Cannes at its best, take a little detour to admire one of the oldest ports on the French Riviera.

In total, the Cannes coastline boasts nearly 8km of beaches. That's why you can't visit Cannes without taking the time to swim in the Mediterranean Sea.


Among the most beautiful sandy beaches in Cannes, the most famous are those along the Croisette. But if you're looking for a quiet spot for a swim, prefer the beaches around the Pointe de la Croisette or those on the Boulevard du Midi, west of Le Suquet.

Opposite the Vieux Port are the Lérins Islands, the unmissable place to visit Cannes. Sainte-Marguerite and Saint-Honorat are two unique jewels where natural and cultural heritage shine.

Sainte-Marguerite Island is the largest of the Lérins Islands. It offers an idyllic setting, between creeks and pine and eucalyptus forest. Welcome to the hikers' paradise! The island has more than 22 km of trails, all offering unique landscapes.

Sainte-Marguerite Island also has a rich historical heritage, including archaeological remains and its Fort Royal. If you wish to visit Cannes in depth, don't forget to make a stop in the Lérins Islands!

Separated from Île Sainte-Marguerite by only 600 metres of sea, Île Saint-Honorat also has a rich historical past. Its Abbey of the monks of Lérins, as well as the remains of a fortified monastery and numerous chapels, make the island a destination conducive to meditation.

Saint-Honorat is 1500 metres long and is ideal to discover on foot. Indeed, it is wooded with umbrella pines and maritime pines, and offers beautiful viewpoints. Whether you are a visitor in search of spirituality or a lover of authentic sites, come and discover these treasures of the French Riviera!


6. Cannes and the cinema

Since 1939, Cannes has become the city of cinema. Today, the Cannes Film Festival is a name with a global resonance. Thus, admiring the Palais des Festivals, its mythical steps and its famous red carpet, is obviously a must to visit Cannes.

But it is not only in May, at the time of the Festival, that one can enjoy the cinema. Indeed, all year long Cannes pays tribute to the cinema by offering to its walls huge frescos representing the biggest stars and the best memories of the canvas. So walk around the city in search of Charlie Chaplin or Marilyn Monroe!

Make no mistake, you are not in the United States on the famous Walk of Fame! No, you're definitely visiting Cannes. Just like in Los Angeles, the Cannes Walk of Fame pays tribute to the directors, actors and other celebrities of the 7th Art who have made history.

Here you will find hand casts and signatures of more than 300 personalities who have marked the history of the city. Come and discover these fantastic slabs that line the square in front of the Palais des Festivals and stroll along the Georges Pompidou esplanade and its gardens. The Chemin des étoiles offers you the opportunity to approach and touch the hand of your favourite actor!

To visit Cannes is to combine culture, heritage and the French art of living. The city therefore offers a wide range of hotels, with six five-star hotels and more than 100 two- to four-star establishments. Most of them are located along the famous Croisette with its private beaches. Even if you don't want to stay here, it's worth a look!

Since the beginning of the 20th century, the city of Cannes has been the European gaming capital. Between Black Jack, Poker and Roulette, Cannes is the only city in France to host three casinos. As prestigious as the city, each establishment cultivates refinement and elegance to welcome players from all over the world.

10. The museums of Cannes

Cannes' cultural heritage is rich and varied. Take the time to enjoy it properly, for example by visiting the sea museum or the Castre museum.

The Museum of the Sea

If during your stay you go to Sainte-Marguerite Island, drop by and visit the Sea Museum. It occupies the oldest part of the Royal Fort, classified as a historical monument. There you will discover important underwater archaeological material from wrecks found around the Lérins islands, as well as fragments of Roman frescoes and the cell of the former state prison!

The Musée de la Castre and its square tower

The Musée de la Castre is located in the heights of Cannes, at the top of Le Suquet. Installed in the medieval castle, it is notably composed of the Sainte-Anne chapel and the Castre tower. Moreover, both are classified as Historic Monuments.

The museum gathers a rich collection of primitive art and Mediterranean antiques. It is also famous for its musical instruments from all over the world.

La Malmaison is a cultural space where major exhibitions of contemporary art are held every year. It is the only surviving pavilion of the Grand Hotel Cannes, built in 1863 by the architects Vianey and Blondel. This prestigious venue is located on the Croisette.

The Forville market is a must to visit Cannes! Seasonal products, local fishing and flowers are offered there. This large covered market is held in the heart of Cannes and is open every morning, except on Mondays when it gives way to an antique market.

The Forville market is a real invitation to a gourmet trip in Provence. You can also discover the many shops and terraces that surround it. Go there to taste the general atmosphere, but also take the opportunity to taste some local specialties. Socca and panisses will surely be to your taste!

Visiting Cannes also means enjoying the vegetation and greenery. The natural heritage of Cannes is as rich and bewitching as its history. So to appreciate all the beauty of the city's landscape, go to the Croix des Gardes for a pleasant walk to the sound of cicadas.

Less than a kilometre from the town centre, the Croix des Gardes is located on a hill overlooking the town behind the Suquet district. It is a Sensitive Natural Space nicknamed the "green lung" of Cannes. Indeed, the large forest park of La Croix des Gardes is a unique reserve for Provencal fauna and flora.

The Villa Rothschild is located in the Croix des Gardes district. It was built in 1881 for the Baroness de Rothschild. This magnificent villa and its park are both classified as Historic Monuments. So, if you come to visit Cannes, this place is not to be missed.

From the neo-classical style to the English gardens, this romantic place par excellence is a remarkable witness of the resort architecture on the French Riviera. In 1947, the villa was confiscated from its owners during the occupation. It thus became the property of the town, which set up the Noailles municipal media library and hosts many cultural events.

How to get to Cannes?

To get to Cannes, many alternatives are possible:

If you take theplane to come to Cannes, several options are available to you:

To help you in your search, a flight comparator may be useful.

It is quite possible to visit Cannes by train. Indeed, the city is largely served by the TGV, which connects it to all French regions as well as to the largest cities in Europe. This mode of transport will allow you to discover spectacular landscapes from the seaside to the foot of the Estérel massif.

Also to be read: Cheap parking in Cannes: where to park in Cannes?

Where to stay in Cannes?

From the Grand Hotel to the Airbnb, the city offers many alternatives. A wide choice of hotels is available. A hotel comparator may help you in your search.

Otherwise, for prices that are generally more accessible, you can rent an Airbnb apartment in the city centre or in the surrounding area. Choose Antibes or Saint-Tropez to stay in the nearest one. You can also choose Nice, the capital of the department. A little further on the French Riviera, sleep in Menton or Monaco!

Wherever you live, now that you know all the secrets to visit Cannes, your stay can only be wonderful!

In which district to stay in Mimizan?

Where to stay along the Compostela pilgrimage?

Boat rental in Port-Vendres: how and where?

Visiting Tourrettes-sur-Loup: what to do, what to see?

The 10 must-do things to do in Brittany

98%
We have been able to provide in 98% of times, the solutions that users were looking for when consulting our page.